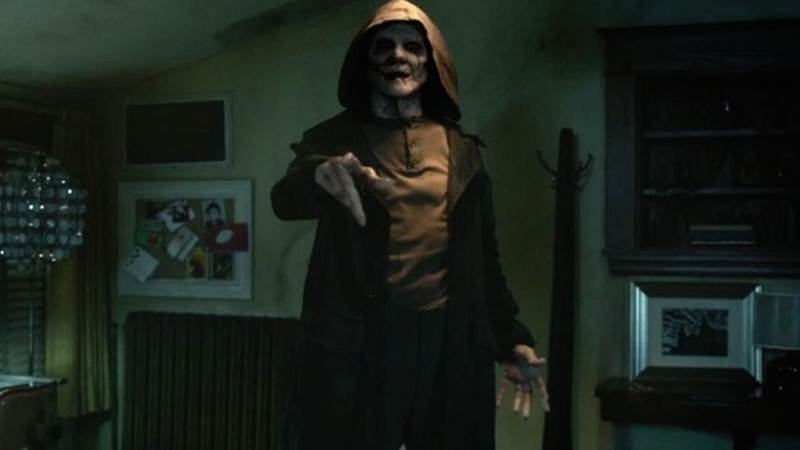 Adapted for the screen by Jonathan Penner from an extract from Robert Damon Schneck book, “The President’s Vampire,” this horror film helmed by Penner’s wife Stacy Title, begins with a bang and ends with a whimper. Or literally, a whisper. For that’s what a survivor does at the very end. Starring a young, unknown in these parts, bunch of actors, the film is kick-started by a chilling scene of an innocuous looking man murdering his family and friends.

Cut to the aforementioned young cast, principally three collegians (Sasha played by Cressida Bonas, Douglas Smith as Elliott, her boyfriend and Lucien Laviscount as his bestie John) who are threatened by malevolence in their rented house. Your reviewers was spooked by jump scares through the film which, to its credit, maintains a creepy atmosphere.

As horror films go though, the narrative falls back on the tried and tested found in flicks like Candyman, Final Destination and The Ring: This time around, the setting is the haunted house with the usual ingredients: hallucinations, inexplicable illness. Coins materialise (a red herring as far as I am concerned) Jealousy and paranoia sets in after and with the hallucinations/nightmares and suchlike.

Post interval, the characters (and the viewer) see the hooded demon (Doug Jones) which makes people do awful things. How? By getting inside their heads. Sensible people would have moved out immediately. But silly Sasha invites a psychic friend Kim ( Jenna Kanell) to “cleanse” the house and Elliott decides to bone up about the murders) in the library.

The Bye Bye Man makes case for sparing people the awful truth.”Don’t say it, don’t think it.” What? A certain name. In this injunction to desist from uttering the titular moniker, the narrative plunders the Old Testament to subvert the hallowed name of God which was so sacred, the Jews only pronounced the Hebrew syllables Yahweh. The film also suggests ignorance is bliss. A small child is saved by honesty and innocence. Her performance saves the day as do the cameos by the Oscar winning veteran Faye Dunaway  and Carrie Ann Fisher of Matrix fame.