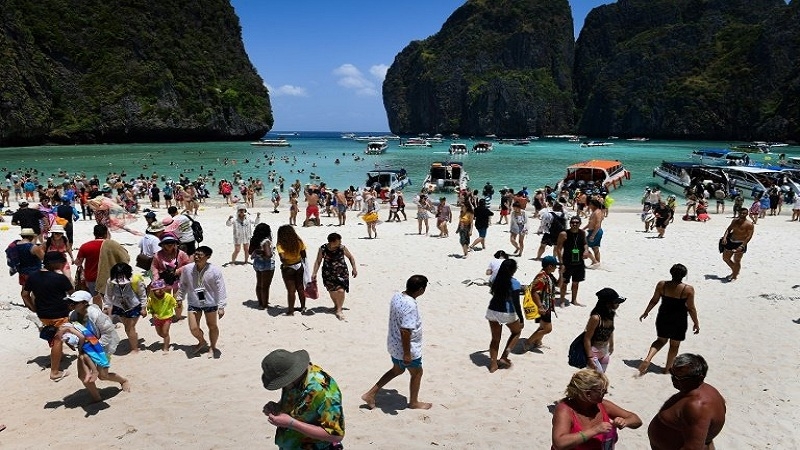 Bangkok : The glittering Thai bay immortalised in the movie The Beach will be closed indefinitely to allow it to recover from the impact of hordes of tourists, an official said on Wednesday, as a temporary ban on visitors expired. Maya Bay, ringed by cliffs on Ko Phi Phi Ley island, was made famous when it featured in the 2000 film starring Leonardo DiCaprio.

It was initially shut for four months in June due to beach erosion and pollution as the white-sand paradise sagged under pressure from thousands of day-trippers arriving by boat. But a survey of the problem during the temporary ban made clear that the short-term fix was not going to work and that the damage was worse than originally thought.
“We have evaluated each month and found out that the ecological system was seriously destroyed from tourism of up to 5,000 people daily,” Songtam Suksawang, director of the National Parks office, told AFP. “It’s very difficult to remedy and rehabilitate because its beach was completely destroyed as well the plants which cover it,” he said, adding it was “impossible” for recovery to occur in the allotted time.

Thailand’s Department of National Parks, Wildlife and Plant Conservation announced the indefinite closure in a royal gazette published on October 1. It said the restrictions on tourism would not be lifted until the ecosystem “fully recovers to a normal situation”.Besides beach erosion, heavy traffic around the azure waters can also damage sensitive coral reefs, already vulnerable to rising sea temperatures and climate change.