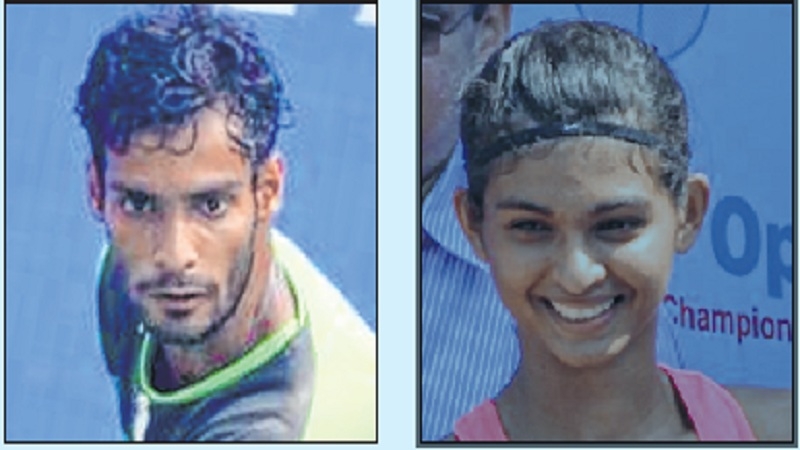 New Delhi: An energetic Siddharth Vishwakarma overwhelmed title-favourite and top seed Arjun Kadhe with his thunderous returns to emerge new national tennis champion while Mahak Jain outplayed Natsaha Palha to defend the women’s singles crown at Fenesta Nationals here  on Saturday.  Left-handed Vishwakarma’s impressive run culminated with a 6-2, 6-7(2), 6-3 win over Kadhe, who is ranked 358 against a humble 1221st ranking of the new champion.

The gap in ranking was huge but there was no gulf as far as quality of tennis was concerned with Vishwakarma dictating terms in the men’s singles final. The 23-year-old from Varanasi moved the Pune-based Kadhe, who was part of the Indian Davis Cup team in Serbia as a reserve member, on both sides of the court, with his deep and powerful returns.

Kadhe mostly put back short balls, which were easily sent back by Vishwakarma, who also used angles very effectively. Kadhe usually has a solid backhand but it did not work on Saturday with feisty returns from Vishwakarma not giving him the time. He always had to rush to his shots, which did not allow him to hit the ball as fluently as he had been doing in previous matches. “I was very confident in the first set but the energy dropped a bit in the second. I was low on energy, so I did not push much in the second set. In the third set when I cramping when I was up 4-2. But I am glad I pulled it off,” said an exhausted Vishwakarma, who could barely stand after receiving the winner’s trophy and even missed the photo shoot due to severe cramps.

Kadhe said it was a “tough” day for him. “He hit the ball nice and I was good only in patches. The start was not good and it makes a huge difference in the finals. He was swinging and I was also swinging but it was not easy out there. I missed a few easy balls on my backhand side and I also could not use my wrist,” said Kadhe.

The women’s singles final, though, turned out to be lopsided as the 17-year-old Mahak hardly broke a sweat in outclassing Palha. Natasha had hit the ball nice and hard against top seed Zeel Desai today her strokes lacked sting. The class XI student at Daily College in Indore eased to a 6-1, 6-2 win over the Goan girl. “I had expected a tough final, she had beaten top seed Zeel. I had my strategy in place and I executed it well,” said Mahak.

Mahak, who also made a final at an ITF event in Jakarta this year, said the transition phase from junior to senior has been tough for her. “I need to get strong physically. They hit the ball very hard on the women’s circuit. I am working hard in gym to get strong,” she said. Meanwhile, Maharashtra’s Siddhant Banthia won the under-18 boys singles title with a 7-6 (0), 6-2 over Calvin Golmei from Chandigarh. Telngana’s Humera Shaik took the  U-18 girls title with a 6-2, 6-4 win over Rashmikaa S  Bamadipaty.