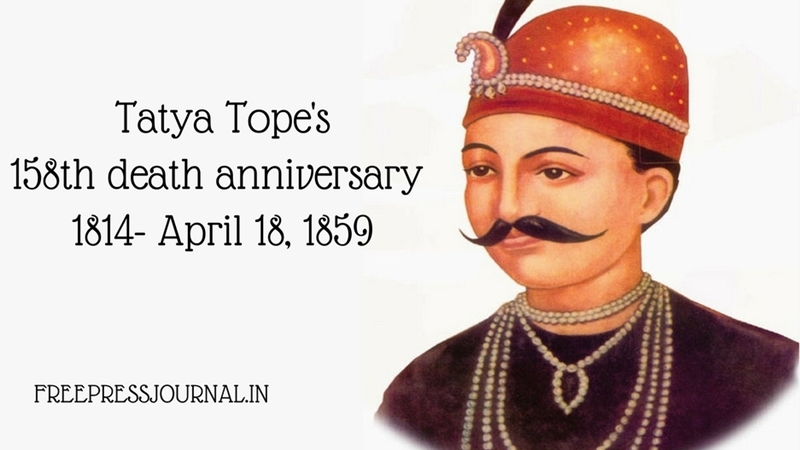 Ramachandra Pandurang Tope better known as Tatya Tope was an important figure in the Indian Rebellion of 1857, the First War of Independence. The revolt was one one of the dramatic instances of India’s struggle against British rule.

Tatya Tope was born in the year 1818 to Rukhmabai and Pandurang Rao Tope. His father was a noble in the court of Peshwa Baji Rao II. Over the years Tatya became an intimate friend and close associate of Nana Sahib, the adopted son of Peshwa. In 1851, the first Marquess of Dalhousie deprived Nana Sahib of his father’s pension and this is how the tiff between Nana and Tatya against the British started.

The First War of Independence

Tatya Tope in collaboration with Nana Sahib secretly organised an anti-British upsurge. In May 1857, Tatya became the Commander-in-Chief of the Bharatiya troops of the East India Company stationed at Kanpur. Tatya emerged victorious in the military encounters with his remarkable feats of guerrilla warrior. Later he shifted his headquarter to Kalpi and joined hands with Rani Lakshmi Bai to occupy Gwalior. But before he could secure his position he was defeated by General Rose which resulted in martyr of Rani Lakshmi Bai. It was the turning point in his life. Since then he started using his iconic guerrilla tactics to harass British and their allies. Tope conducted several sudden raids on British army and after the defeat of his army he would slip off to some another place to form a new army. The British forces chased him since June 1858 to April 1859, but he outsmarted them every time. The army could not arrest Tope in the 2,800 miles marathon that passed through several hills, rivers, forests and mountains.

During one of his escapes, he met Man Singh, King of Narwar and soon became his friend. Man Singh was in conflict with the Maharaja of Gwalior and the British were able to negotiate with him to surrender Tope and get his family protected against the Maharaja.

At last, Tope was betrayed by his trusted friends Man Singh and defeated by General Napier’s British Indian troops. The British Army arrested him on April 7, 1859. After the arrest Tope boldly confessed his acts and also said that he had no regrets as whatever he did was for the mother. He was hanged on April 18, 1859 in Shivpuri.