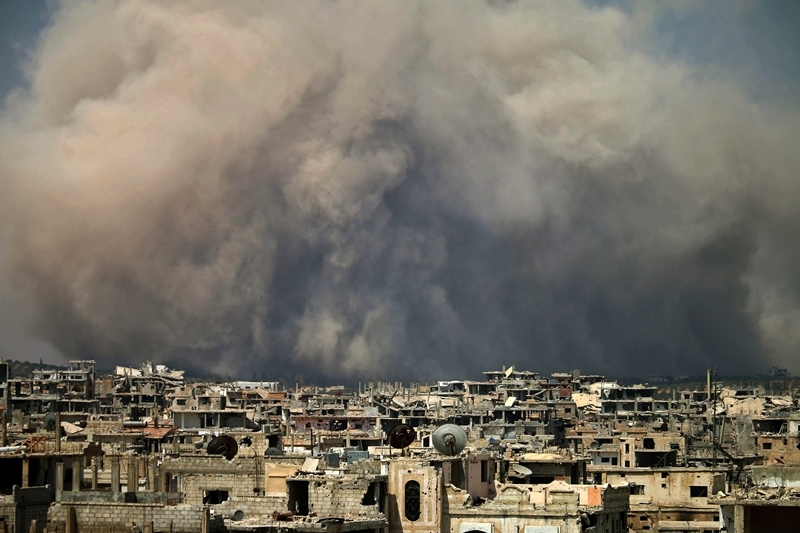 Beirut: Syrian regime forces shelled the last pockets in Damascus controlled by the Islamic State group, preparing the ground for a possible assault on the jihadist stronghold, a monitor said today.

After fully retaking the Eastern Ghouta region on the edge of the capital, the Syrian regime has turned its attention to other areas across the country that still escape its control.

Among them are neighbourhoods in southern Damascus from which many civilians have fled but are still held by IS, including the Yarmuk area that hosts a Palestinian refugee camp.

“Regime forces shelled several IS positions in Yarmuk camp and Hajar al-Aswad, killing one person and wounded several others,” the Syrian Observatory for Human Rights said.
Both sides had traded fire the previous night, the Britain-based monitor said, causing at least five deaths, most of them regime soldiers.

“The regime is turning up the heat ahead of a big assault that would break IS’s back and force them to evacuate the area,” the head of the Observatory, Rami Abdel Rahman, said.

IS still has a presence in Yarmuk, and the neighbouring areas of Hajar al-Aswad, Tadamon and Qadam.

Yarmuk used to be the largest Palestinian refugee camp in Syria, with a population of 160,000, but only a few thousand people remain inside the devastated area.

The Syrian army and its allies have focused their efforts on securing Damascus lately, and earlier this month announced their recapure of Eastern Ghouta, a sprawling suburb of the capital.

Ghouta had been the opposition’s main bastion outside Damascus, but regime forces fully secured it after a blistering two-month assault that ended in negotiated rebel withdrawals.

The state news agency SANA reported on Tuesday that a deal had also been reached for rebels to quit Dumayr, a town further to the east, where a reconciliation agreement had kept a security status quo since 2016.

It said on Wednesday fighters from the Jaish al-Islam rebel faction were continuing to hand over their heavy and intermediate weapons in Dumayr ahead of their departure to the northern town of Jarabulus.

SANA said a total of 5,000 people including 1,500 rebels were expected to leave the town.

Talks were ongoing for the nearby towns of Nasiriya and Jayrud to reach a similar agreement, according to the Observatory.

Shelling slammed into both of those towns on Wednesday, the monitor said, describing the bombardment as an effort by the government to pressure residents and rebels to agree to a withdrawal.