Swiss coach unimpressed with celebrations in win over Serbia 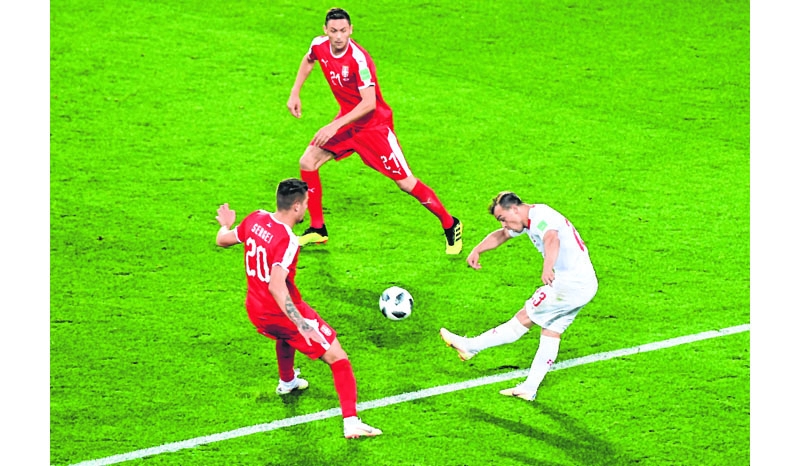 Kaliningrad : Swiss coach Vladimir Petkovic said that politics and football should “never mix” after two players celebrated goals in a 2-1 victory over Serbia with political gestures.

Both Shaqiri and Xhaka trace their roots back to Kosovo, a former province of Serbia, a fact that stoked tensions before and during Friday’s clash.

Both Shaqiri and Xhaka pointedly celebrated scoring by making a ‘double eagle’ gesture with their hands representing the Kosovo flag, viewed as a symbol of defiance.

Although the win puts Switzerland in pole position to make it out of a tough group containing five-times winners Brazil, Petkovic was unimpressed with his players’ celebrations.

“You should never mix politics and football, it’s good to be a fan and important to show respect,” he told reporters after the game.

“It’s clear that emotions surface. I think on and off the pitch we need to steer away from politics in football and we should focus on this as a sport that brings people together.”

Shaqiri had been booed relentlessly by Serbia fans throughout a high-quality match, but the Stoke City forward had the last laugh with his last ditch winner.

“In football you have always emotions and you can see what I did and it’s just emotion,” he said in reference to his controversial celebration.

“I’m very happy to score the goal, that’s all.”

Xhaka, whose 52rd-minute piledriver set up the Swiss comeback, also made the “double eagle” gesture after his goal.

His father, an ethnic Albanian, was imprisoned in Serbia in the 1980s.

Earlier, Serbia had started brightly, anchored by Manchester United’s Nemanja Matic and causing the Swiss defence problems down the right flank in the form of Southampton winger Dusan Tadic.

Mitrovic too looked lively, winning header after header over the Swiss centre backs and he opened the scoring on five minutes with an emphatic finish off an exquisite cross from Tadic.

Switzerland, who came to Russia ranked ahead of the likes of France and Spain, felt their way into the game as the first-half progressed.

On the half-hour mark, Steven Zuber cleverly teed up Blerim Dzemaili but the Hoffenheim man got his feet in a muddle and Vladimir Stojkovic was able to parry away.

Serbia could have gone in two goals to the good at the break but Matic missed a glorious chance when Tadic’s in-swinging corner found him unmarked at the back post but he couldn’t sort his feet out.

Switzerland grew in stature after the break and were rewarded with a spectacular equaliser courtesy of Xhaka’s left foot.

They had the better chances in the second period, with Shaqiri’s curling effort from the edge of the area grazing Stojkovic’s bar on the hour mark.

Petkovic brought on attackers Breel Embolo and Mario Gavranovic in search of a winner, and Gavranovic forced a smart save from Stojkovic from a close range effort with 10 minutes remaining.

But it was Shaqiri who struck the decisive blow, breaking through Serbia’s offside trap to slot home calmly as the 90 minutes wound down.

“We lost our bearings a little in the first half but we bounced back,” said Petkovic.

“What is important is that we’ve developed this winning mentality. Even when we are down we keep our heads up and try to win every game.”        Switzerland now need only a draw against Costa Rica in their final Group E match, while Serbia need at least a point against Brazil to reach the knockout stages for the first time.

“From day one when we saw the group draw many thought that Brazil was the favourite,” said Serbia coach Mladen Krstajic.

“We need a win and we will focus and do whatever we can to try and do that.”