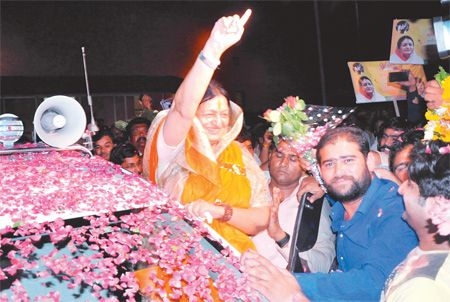 Indore: What people have been admiring for past some months was endorsed by Swachh Survekshan-2017 on Thursday with declaring Indore as cleanest city across the country. Collective efforts put in by civic authorities and Indoreans to keep the city clean really paid off.

For a city, which was ranked 25th among cleanest cities across the country in 2016, a journey to the top slot just within a year was not an easy one.

It asked for sweat and blood. “Officials and sanitation workers of Indore Municipal Corporation (IMC) gave all that took to make this city neat, clean and hygienic. We bagged number one slot in the country only because our efforts were genuine and public supported us,” Mayor Malini Gaud told Free Press over phone from New Delhi.

She said that making this city clean without public support and contribution would have not been possible. Till August 2016, garbage menace was a major challenge before the IMC. In September, it came up with door-to-door garbage collection option which was introduced in a ward on pilot basis.

It turned out to be a huge success and this facility was extended to all the wards. A fleet of more than 600 vans and other vehicles and teams of sanitation workers were pressed into the task of lifting garbage from households and commercial establishments.

The IMC also installed garbage bins at every nook and corner of the city so that people do not litter. Nearly 13,000 public toilets were constructed within municipal limits, which won the city title of free from open defecation. Steps were taken for proper disposal of garbage at trenching ground.  It was ensured that sweepers sweep roads daily.

While on way to morning walk, people would see sweepers sweeping roads, while being a home IMC vans coming to door-step to pick up garbage, people being fined for littering in open, etc. “There was a visible change which brought behavioral change in people also and they also contributed in making this city clean,” said additional municipal commissioner Rohan Saxena.

“When people saw that IMC vans are coming to their homes to collect garbage, they stopped littering on road,” he said. Saxena said that the city had bagged the number one slot in the country but it will be a challenge to maintain that slot now.

Though everybody did its bit but municipal commissioner Manish Singh played a crucial role in getting Indore clean. It was he who would ensure that sanitation workers do not take their work for granted and that vans regularly go to door-steps to collect garbage.

He suspended about 200 workers in last four months who were found to be negligent in their works. Singh would himself carry out surprise inspections at colonies in morning to see whether cleanliness is maintained on not.

Achieving top position in cleanliness in country is a glorious moment.  With collective efforts of people and IMC officials and workers help bag this prestigious award. Even independent organisations like Maha Nagar Viksa Parishad have also contributed a lot to this success. People took cleanliness drive as a campaign particularly in festival time.  It is due to Prime Minister Narendra Modi’s leading by example that people are more aware about cleanliness now, she said.

All credit goes to the residents of the city as this could not have been possible without their support. Officers and employees of Indore Municipal Corporation have played a crucial role in taking the city to top the charts. We have given a slogan to the city ‘Indore Ko Swachh Banana Hai, Ab Hamne Ye Thana Hai’ and citizens responded to the call and made Indore number one.  Now, we have got more responsibility to be on the top and maintain the position.

We have just played the part of monitoring and providing resource but the true heroes of the success are the ground level workers who have been working round the clock to keep the city clean. We had to take many stern steps to reach on the top but it paid off. Things which we have done for making Indore the cleanest city are construction of toilets, door to door garbage collection, check on litter by hotels and restaurants and cleaning of major roads at least twice in a day. We will keep the work and maintain the position on the chart.