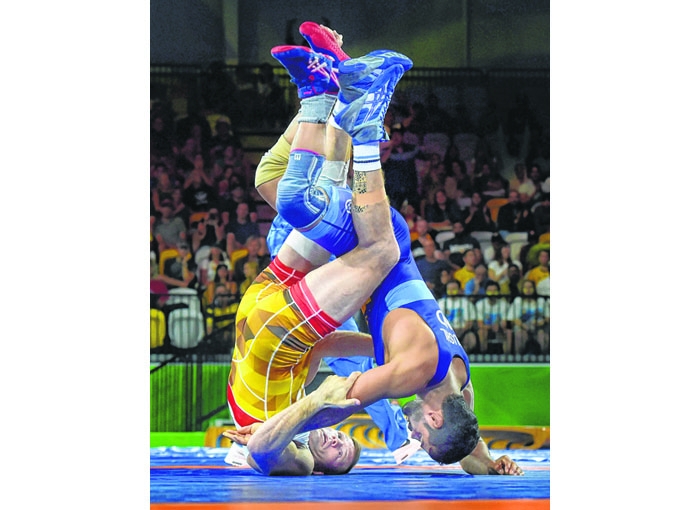 Aware’s triumph opened India’s gold medal account in the wrestling competition at the Games. He also had a smooth passage into the final with comprehensive wins over England’s George Ramm, Australia’s Thomas Cicchini and Pakistan’s Muhammad Bilal.

Defending champion Sushil barely spent any time on the mat, his final lasting just a minute and 20 seconds, and claimed easy victories to claim his third successive gold at the Games, a love affair that began in 2010 Delhi edition.

However, another defending champion Babita phogat (53kg) settled for a silver, while debutant Kiran happily flaunted a hard-earned bronze.

Kiran defeated Mauritian Katouskia Pariadhaven by fall in the repechage of the 76kg category for her first major medal at the international level.

Sushil took very little time to defeat Johannes Botha of South Africa on technical superiority. The South African came into the bout struggling with a leg injury and that just about ended any chance of him getting an upset win over the former world champion Indian.

Prior to the final, Sushil scored easy technical superiority victories over Canada’s Jevon Balfour and Pakistan’s Muhammad Asad Butt before scoring a victory by fall over Australia’s Connor Evans.

The celebrated wrestler, however, doggedly avoided the media after his triumph, refusing to take questions despite repeated requests from even the Games news service volunteers.

Aware, on the other hand, prevailed 15-7 over Canada’s Steven Takahashi in an exciting contest during which the Indian was troubled by a groin niggle but chose to carry on with more than a minute left on the clock.

Aware’s triumph opened India’s gold medal account in the three-day wrestling competition at the Games. He also had a smooth passage into the final with comprehensive wins over England’s George Ramm, Australia’s Thomas Cicchini and Pakistan’s Muhammad Bilal.

“I have been waiting for this medal for the last 10 years. I can’t describe how it feels to claim it. I missed out on 2010, even in 2014, the team was sent without trials. So, I am very happy that I could finally fulfill this dream,” said the 26-year-old, who is also the reigning Commonwealth championships gold-medallist.

“My leg was troubling me for a while but I dedicate this to my guru (former CWG gold-medallist Harishchandra Birajdar) who passed away in 2011, I am happy that all the efforts I put in got the result I wanted. I have fulfilled my family’s dream. My opponent probably lacked intensity in the final few moments,” added the wrestler.

However, Babita settled for silver after being outmanuevered by Canada’s Diana Weicker in the summit clash.

Babita, who claimed a silver in the 2010 edition before a gold in Glasgow, failed to break through her rival’s defences, going down 2-5 in the contest. “I think my weakness today was my attack, I should have been more aggressive but I gave my 100 per cent. I am satisfied with the intensity I put in but obviously I could not get the result I wanted,” she said.

“I had a bit of a problem in my knees too but injuries are a wrestler’s ornaments. We live with niggles, there is nothing there,” she added.

While Babita’s bout lacked spark, Aware’s showdown with Takahashi was thoroughly engaging. The Indian trailed 6-7 at one stage but claimed points on takedown to recover and keep himself ahead.