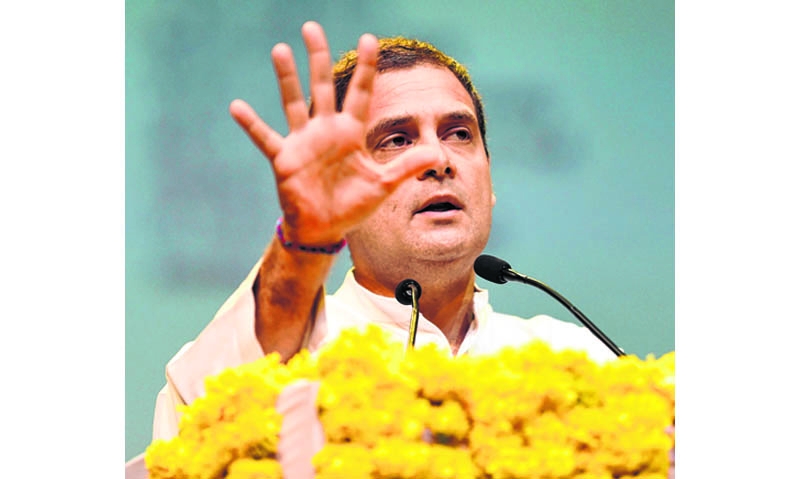 New Delhi : Congress President Rahul Gandhi lashed out at PM Modi over his silence on the Rafale scam alleging PM Modi and Anil Ambani jointly carried out a “surgical strike” on the defence forces. At a press conference, he said that the PM owes to the nation to clarify on former French President François Hollande accusing him of forcing his friend industrialist Anil Ambani on Dassault Aviation to award him the Rafale contract. Rahul said, “We are convinced that our PM is corrupt if he remains completely silent in the face of the former French president’s charge”. Rahul said PM Modi has betrayed the trust of people by giving the offset contract to Ambani who owes Rs 45,000 to banks and who has not built any aircraft but registered a firm for the contract 12 days before the Rafale deal in Paris.

Rahul said that neither former defence ministers Manohar Parrikar, nor Arun Jaitley nor present defence minister Nirmala Sitharaman had signed the Rafale aircraft deal but they are forced to speak “lies” to protect Modi who signed it.

Parrikar, now ailing Goa CM, was the defence minister when Modi signed the deal and he had gone on record that he did not know the contract signed for 126 Rafale aircraft had been changed as he was that day buying fish in a Goa market, Rahul said, pointing out how the present defence minister keeps changing her stand. First, she promised to disclose the price at which the aircraft was bought, but later wriggled out saying it is a state secret document.

When France denied any secrecy on the price, she again spoke a lie in Lok Sabha, Rahul alleged, pointing out that her latest lie that the public sector Hindustan Aeronautics Ltd (HAL) was found incapable of servicing the fighter jets by the manufacturer was blasted by none else but then chief of HAL.

He said people trusted the PM, but he betrayed them by taking out money from their pockets and putting it in the pocket of Anil Ambani who was already a defaulter to the tune of Rs 45,000 crore. Rahul said his concern was the question of dignity of the PM’’s Office that has been into suspicion by the former French President. “I am only trying to protect the PM’s office by exhorting him to speak out,” he said, regretting that “aavaaz nahi nikal rahi hai (no word from him).”

Shiv Sena Member of Parliament Sanjay Raut reportedly said, “Only PM Modi can clarify on the Rafale deal now, given the revelation by Francois Hollande”.