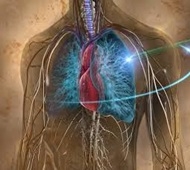 Beijing: Superefficient, bird-like lungs may have given dinosaurs the energy to run and fight by pumping in a constant supply of oxygen, according to a study.  In the oxygen-poor air of the Mesozoic era, nothing should have been able to move very fast, however, Velociraptors could run up to 64 kilometers per hour, said researchers from the Chinese Academy of Sciences. Biologists have long known that birds, which descend from one branch of extinct dinosaurs, have an unusual, sophisticated respiratory system that enables powered flight.

However, paleontologists have debated whether those superlungs arose only in birds or earlier in dinosaurs. Unlike humans and other mammals, whose lungs expand and deflate, bird lungs are rigid, according to the study published in the journal Royal Society Open Science. Special air sacs alongside the lungs do the heavy lifting instead, pumping air through the lungs, where the oxygen diffuses into the bloodstream. The lungs are attached to the vertebrae and ribs, which form the “ceiling” of the rib cage — all of which helps keep the lungs stationary.

A connector called the costovertebral joint, where the ribs and vertebrae meet, provides further support. That setup allows for a continuous stream of oxygen and requires less energy than inflating and deflating the lungs. It also allows paleontologists studying fossils to learn a lot about the lungs by examining the bones around them.Back then, the air was only 10 to 15 per cent oxygen, compared with 20 per cent today, researchers said. The work sheds light on how birds’ extraordinary lungs evolved, said Jingmai O’Connor, a paleontologist at the Chinese Academy of Sciences. “Birds are really weird compared to all other animals. They have this highly evolved respiration system, (and) we’ve always wondered, ‘How did this evolve?’” O’Connor said. Now, it seems likely that superlungs first developed in dinosaurs, and only later on evolved to support powered flight in birds, she said.