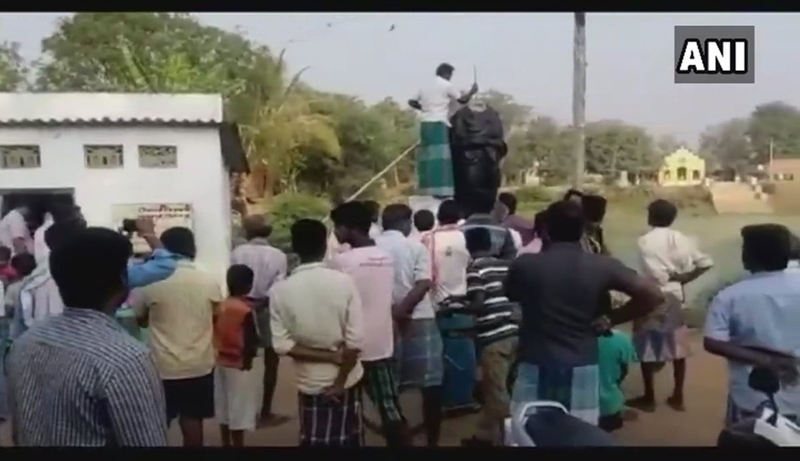 Pudukottai (TN): A statue of social reformer and Dravidian movement icon E V Ramasamy, popularly known as “Periyar”, was found damaged in a village here on Tuesday, the latest in a series of similar incidents of vandalism.

The head of the statue was found cut and placed near a traffic roundabout, police said. The vandalism drew condemnation from Congress president Rahul Gandhi, DMK working president M K Stalin and top actor Rajinikanth. Police said district authorities restored the statue to its original state within hours of the incident. A large contingent of police has been deployed in the area to prevent any untoward incident, police said, adding a case has been registered.

Gandhi in a tweet said “when the RSS & BJP encouraged the tearing down of Lenin statues in Tripura, they signalled their cadres to destroy statues of those who opposed their ideology, like Periyar, the great social reformer who fought for the Dalits. His statue too was destroyed today in Tamil Nadu.” He also posted a picture of a headless Periyar statue.

Stalin charged the government with being ‘just a spectator’ and said if appropriate action had been taken against BJP leader H Raja’s comments that Periyar statues should be removed, the vandalism could have been averted. “This government is just a spectator and that is the truth,” he told reporters. Stalin, also Leader of Opposition in the assembly, said “they (vandalised) did it at night and if they had done it in broad daylight, they would have got punishment for it.” He said the “crowd of cowards who are trying to enter Tamil Nadu through the rear entrance are miscalculating that by destroying Periyar’s statue his ideology could also be struck off.”

The DMK leader’s remark is perceived as directed at the saffron party against the backdrop of a controversy involving its leader Raja. Rajinikanth, who is set to enter politics, said on his return here from his sojourn in Uttarakhand that “it is a barbaric act, I have said this before and I reiterate now, I strongly condemn it.” Taking a break, the actor, who is set to enter politics, had embarked on his pilgrimage to Uttarakhand on March 10.

Earlier, on March 6, a statue of the Dravidian leader was allegedly vandalised in the Vellore district and two persons were arrested. The incident assumed political significance as it came after senior BJP leader H Raja indicated that statues of the rationalist leader could be the next to be pulled down after a statue of Communist icon Lenin was razed by suspected BJP workers in Tripura.

After coming under fire from political parties for his comments on Periyar, Raja had sought to blame his “Facebook administrator” for the gaffe and had expressed regret over the same. Prime Minister Narendra Modi had also strongly condemned the incidents of vandalism of statues across the country and had said stern action would be taken against those found guilty.