Statue of Unity: Sardar Vallabhbhai Patel gets his due 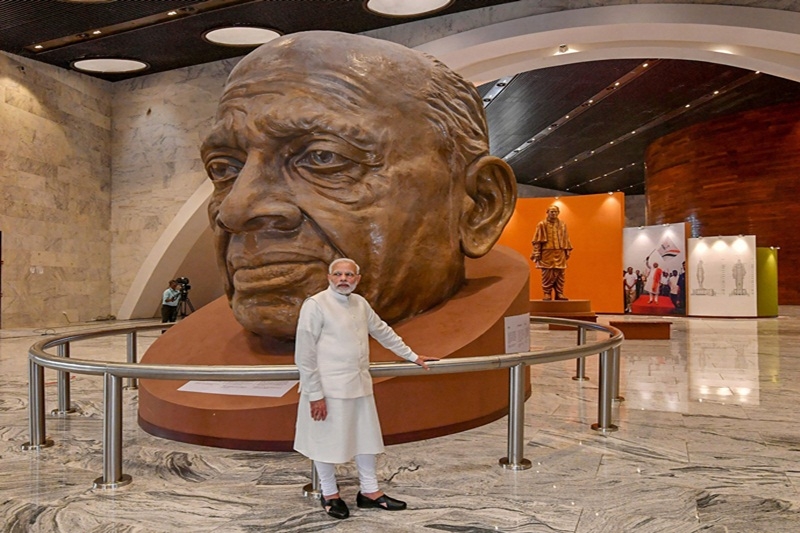 Kevadia colony (Gujarat): Prime Minister Narendra Modi on Wednesday dedicated to the nation a 182 metre tall statue of first deputy Prime Minister, Sardar Vallabhbhai Patel, and termed the elderly statesman’s vision as a reminder of the unity and agelessness of India.

‘‘There were many who thought that a diverse country like India can never remain united but Sardar Patel proved them wrong. It was his contribution that the country can meet the world on its own terms and is moving ahead to become an economic and military superpower,” he added. Built on the Sadhu Bet island on the Narmada river at a cost of Rs 2389 crore, the statue has been hyped as the tallest in the world, surpassing China’s spring temple Buddha that stands at 153 metres by 29 metres and nearly twice the size of the 93 metre Statue of Liberty at New York.

The statue located 3.2 km downstream of the Sardar Sarovar dam has a viewing gallery at a height of 153 metres. Other attractions at the venue include a 17-km-long valley of flowers, and a tent city for tourists. As the Prime Minister dedicated the statue to the nation, three planes of the Indian Air Force flew in formation to form the Tricolour in the sky. The Prime Minister attacked those who were opposing the rekindling of the persona and contributions of historical figures like Sardar, Chhatrapati Shivaji, Baba Ambedkar and others. ‘‘I am truly shocked that our efforts are being seen through a politically polarized prism. Imagine such historic revival is bringing us criticism, as if we are committing some major crime,” he added.