St. Petersburg: Get captivated by the northern splendour 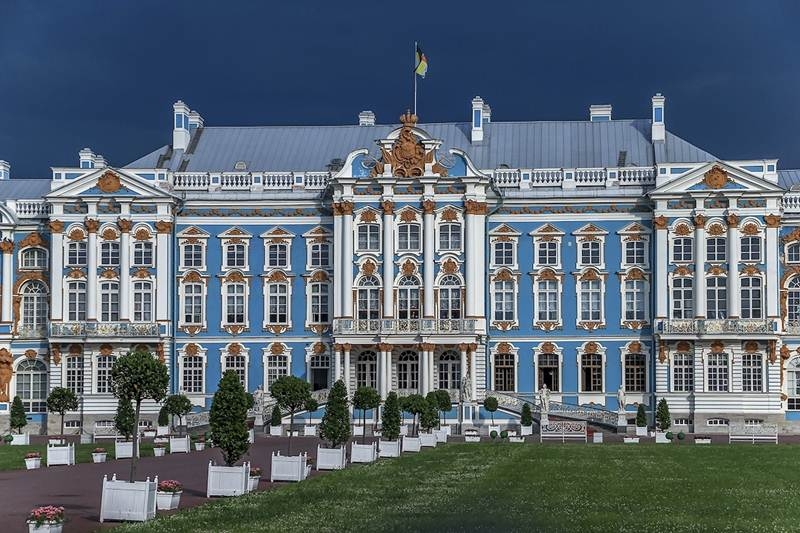 Recently being rediscovered, the collections magnificent palaces in and around St. Petersburg is unparalleled anywhere else in the world, writes Uday k Chakraborty

In their heyday, if the imperial palaces of Russia fell short of besting those of Europe for splendour and sophistication, it was not for lack of determination. Under the command of Peter, the Great, a marshy wilderness was transformed into the watery capital of St. Petersburg. His effort resulted in St. Petersburg having the largest and most exquisite collection of palaces in the world. All the czars, in the century after Peter the Great founded his capital, plowed their mighty resources into these magnificent edifices as monuments to their power and their pleasure. Today, there is no contest. In no other city so many such structures been so meticulously restored with a combination of public penance and civic pride. 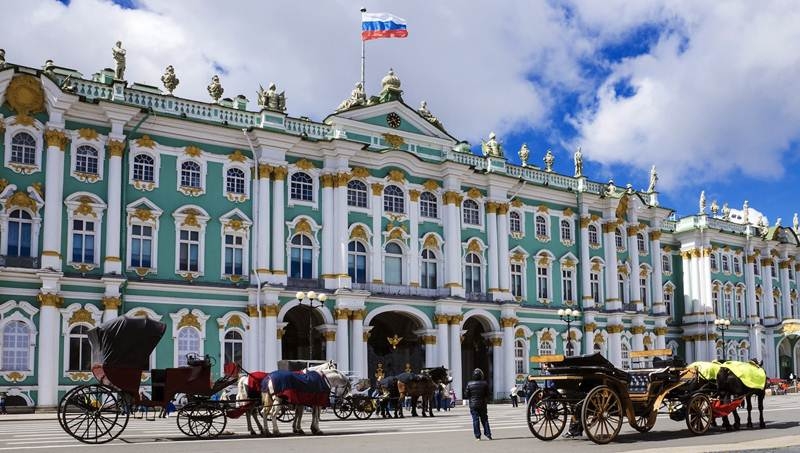 Today, Czar’s presidential palace in St. Petersburg has been converted into one of world’s most magnificent museum known as Hermitage, which is a not-to-be missed site for every tourist. Another stone palace erected in the city, and surely the finest, was Menshikov, built for Prince Aleksander Menshikov, a close friend and advisor of Peter the Great, who made him governor general of the city. It remains best example of early eighteenth-century city life among the nobility. And because it was frequented by the czar and his family, it reveals something of how the court functioned. It is built on Vasilevsky Island, the site Peter had selected for the hub of the city. Once approached by boats, the entrance hall led visitors straight through from the river deck to the courtyard or up a grand staircase to the main banquet room. The entry’s delicate colours, elaborate vaulting, and statuary were statements of the Governor General’s appreciation for European finery.

But, I feel, no trip to St. Petersburg is complete without a visit to the gorgeous outskirt of this great city, 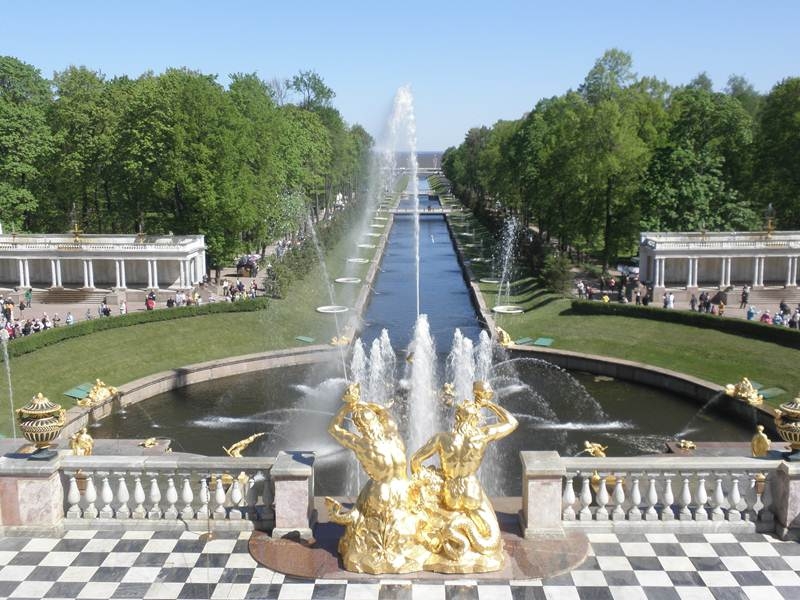 to discover its magnificent palaces. In search of those beautiful edifices, I took a hydrofoil ride from Staeck Prospect in St. Petersburg. It was a 32-km exciting ride down the Neva River to the place where it meets the Baltic Sea. Here on the southern shore of Gulf of Finland, Peter the Great chose this spot for a grand summer palace called Peterhof (in German meaning “Peter’s court” and Petrovorets in Russian) – a grand ensemble of formal gardens, fountains, and pleasure structures that he dedicated to his conquest of this land and his victories at sea over Sweden. He sincerely hoped this palace would rival Versailles palace in France.

The pleasure palace has a spectacular system of fountains that cascade through the park and gardens. The buildings were badly damaged during the WWII but have been meticulously restored according to the original plans. Some 129 fountains in the system that begins 21 KM away are working today. The most impressive of them is the Samson fountain, directly in front of the Grand Palace, which portrays Samson ripping open the jaws of a lion as a spray of water rises 65 feet in the air from the lion’s mouth. From the Golden Hill Cascade past the Marley pavilion and its reflecting pool Baltic Sea is clearly visible.

For all the grandeur of most of Peterhof, relatively new and simpler Monplaisir, situated next to this complex, was another favourite of Peter the Great.  Among the treasures of Monplasir is its exquisitely designed reception room and collections of oil paintings by Dutch and Flemish artists.

Quaint town of Pushkin can be reached by local trains from the Vitebsky Station in St. Petersburg. Pushkin is worth a visit because it is the site of Yekterinsky Palace, named for Peter the Great’s wife, Catherine I. The palace has a stunning aqua façade, decorated with gold and white ornaments. Part of the palace is now open as a museum with exhibition of furniture, china and the palace’s history. There is also a museum with manuscript, rare books, and the personal belongings of Alexander Pushkin, who studied at the school for the nobility attached to the palace.

One has to glimpse the mammoth thousand-foot long façade of the Catherine Palace a portion at a time. Here Italian architect Bartolomeo Francesco Rastrelli produced one of the most exuberant expressions of Russian baroque – that interesting hybrid of curvaceous European line with grandiose Russian scale and colour. The palace is encrusted with pillars and capitals, vases and garlands, sculptures and balustrades. The facade was originally painted clear yellow, and all the relief work was gilded. Golden domes punctuated its gleaming roof, made of silvery sheet iron. The glow of the exterior was echoed by miles of carved gilt-work inside. The sprawling garden follows the formal style of Versailles palace. There were also a series of pavilions in the garden to lure royal guests for strolls along brood avenues lining the reflecting pools. 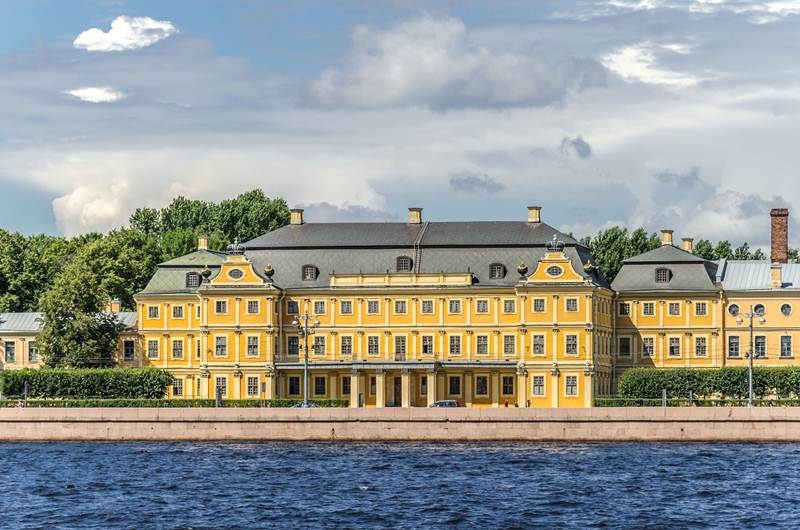 Pavlovsk, one of the most beautifully restored palaces is less than 2 km from Pushkin. Originally hunting grounds that belonged to the Czar’s Village, the palace grounds constitute one of the largest landscaped parks in Europe. This, as well as all the above palaces, is also museums displaying furniture, porcelains, tapestries, clothing, jewels and armories from those periods.

Ironically, while not many from India visit great city of St. Petersburg, among those who does, hardly anyone care to go to the outskirts to discover these splendid edifices that sit in a fairy tale surroundings on the shore of Baltic Sea.