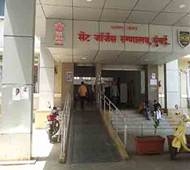 Mumbai: St. George’s Hospital, which is one of the oldest institutions in the city, is currently undergoing a major make-over in which the historic building is being refurbished. After the clean-up, better medical facilities will be provided to hospital patients. According to Hospital superintendent Dr Jagdish Bhavani, the nearly 350-year-old building has been in a state of disrepair since several years. “The building was not kept clean and the walls and the windows were chipped and broken at many places,” he said. Even the general look of the OPD area and the wards was not very good and hence it was decided to take up renovation of the hospital in a big way.

The state government has earmarked Rs nine crore for the renovation and the work is already in full swing, the doctor said.” This is a heritage building and hence we carried out a proper cleaning of the stone walls in consultation with the heritage society so that it gave a new look to the structure,” he said. It took the staff almost a year to clean the walls which had been lying in a state of neglect for a long time.

Apart from the structural renovations, the hospital has also been provided with better medical care facilities that will help patients. “Right from the operation theatre to the casualty and even the Outpatients Department area has been spruced up and the wards have been given facilities like central oxygen to improve patient care,” Dr Bhavani said. The renovation activity has been happening since last year and a large portion of the work has already been completed, Dr Bhavani said. “But there is some work that is still remaining and we hope to complete this within the next one year,” he added.

Something like the blood bank which is needed for surgeries and for thalassemia patients has also been made of international standards. “Instead of giving whole blood to the patients, our blood bank has the equipment to make blood components so that only the component that is needed is given to the patients,” he explained.

The historical background of St. George’s Hospital, Mumbai, also known as the European General Hospital, began at the close of the 17th Century after the death of Sir George Oxendon, the first Governor of Mumbai. In July 1669, Gerald Aungier, a man of great wisdom and foresight and who is still remembered as the real founder of Mumbai took charge as the second Governor of Mumbai and shifted his headquarter from Surat to Mumbai in the middle of 1672, and started his reforms that changed the face of Mumbai Island. He built Fort George to fortify the defence of Mumbai. It is fascinating that a small fragment of the said fort still forms a part of Eastern Boundary wall of the hospital. In 1675, the Court of Directors formerly sanctioned the erection of the hospital. An excellent and well-equipped multi speciality St. George’s Hospital was finally opened for public use on December 20, 1892.