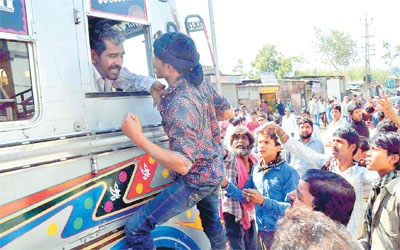 Soon after the accident furious mob attacked over the bus and broke its glasses. Mob also tried to put the bus on fire which created chaos among the passengers but was somehow controlled by Chimanganj Mandi police which rushed to the spot on getting the information. Accident occurred when the kid Pradeep along with his mother Latabai was returning after fetching drinking water from hand pump located on the other side of the Agar Road. Driver of the bus which was coming towards Shajapur lost its control while taking turn towards Agar Road and ran over the kid.

After the accident, furious mob nabbed the driver of the bus, Jitendra Jaat who was trying to slip away from the spot and handed over him to police. Furious relatives of the deceased kid also staged chakkajam on the spot on the demand of constructing speed breaker on the road for preventing such kind of accidents in future. Jiwajiganj CSP Malkeet Singh and other cops had to handle the mob with heavy hands to open the chakkajam from the spot.

Chimanganj TI, Sanjay Verma informed Free Press that a case has been registered under Section 279 and 337 of IPC against driver of the bus, Jitendra Jaat and interrogation is being conducted.