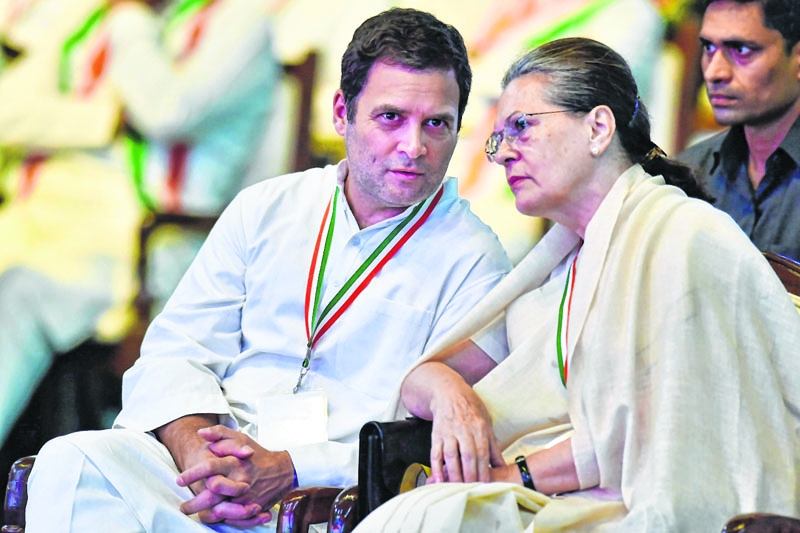 New Delhi : Former Congress President Sonia Gandhi on Saturday exhorted Congress members to take a pledge for struggle and sacrifices as an answer to BJP’s call for “Congress-Mukt Bharat” (India free of Congress) to usher in India free of fear (bhay), arrogance (ahankar) and revenge (pratishodh). She also wanted a “Pakshpat-mukt Bharat) and a “Hahakar-mukt Bharat) in which every Indian can live with dignity.

In her 16-minute address on the opening day of the two-day AICC plenary session, she asked everyone to unite behind her son Rahul Gandhi, who has taken over the responsibility from her as the new president during the most challenging time, to help the party win the 2019 elections.

Noting that Congress is not just a political party but a movement of 133 years reflecting people’s composite Indian culture, she wished that it once began to decide

the basic agenda of the country under Rahul’s leadership as a thread of link in political and public dialogue.

Exuding confidence that Congress will be re-elected in the upcoming Karnataka Assembly elections, she said the recent results in Gujarat, Rajasthan and Madhya Pradesh shows that those who wanted to wipe out the existence of the Congress from politics had no idea that people still have great love for the Congress.

Reeling out a series of reforms ushered in by the previous UPA government, Sonia said she only felt sad that the Modi government was engaged in weakening and ignoring all these programmes.

It left no stone unturned in using all tactics as a show of arrogance and drunk with power to destroy the Congress, but her party never bent and will never bent, she said, adding that people have now understood that Modi’s 2014 promises of “Sabka Saath, Sabka Vikas” and “Na khaaunga, na khaane dunga” and his “Man ki Baat” radio talk were just a drama (drama-baazi) and trick to capture power.

The Congress joined the chorus against Electronic voting machines on Saturday. It demanded that EVMs should be dumped and India should go back to using paper ballot paper. This would restore the credibility of the electoral process, the party pointed out. It also rejected the BJP’s move for simultaneous Lok Sabha and Assembly elections as misplaced since it is impractical and incompatible with the Constitution.

NEW DELHI: Congress took the official stand of “a pragmatic approach for cooperation with all like-minded parties by evolving a common workable programme to defeat the BJP-RSS in the 2019 elections.” Already trying to unite the opposition parties to take on the Modi government, it opened its cards in a 10-page political resolution adopted on the first day of its two-day 84th AICC plenary session at the jam-packed Indira Gandhi Indoor Stadium here.