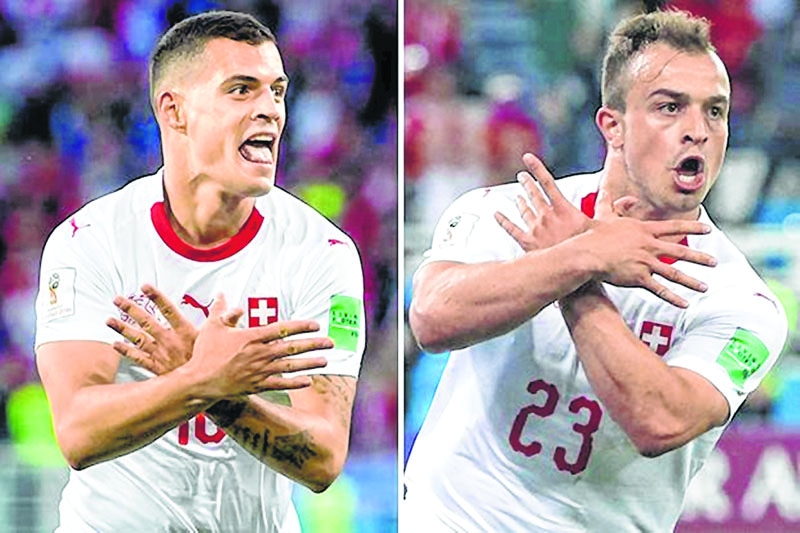 St. Petersburg  : The World Cup Round-of-16 match between Switzerland and Sweden on Tuesday will be a duel between Europe’s two quiet, under-the-radar achievers.

But anyone who has followed Switzerland closely over the past two years will not be surprised by the team’s progress to the pre-quarter-finals.

Vladimir Petkovic’s side is ranked No.8 in the world, having lost just one of their past 25 matches. They warmed up for the tournament by drawing 1-1 with Spain and beating Japan 2-0 five days later.

The Swiss brought that solid form to Russia, holding Brazil to a 1-1 draw in their opener before coming from behind to beat Serbia 2-1. They were slightly less impressive in a 2-2 draw with Costa Rica in their last match, their defense looking unusually vulnerable against the Central American outfit.

While Switzerland’s strength lies in their solidity at the back, they also carry an attacking threat, led by their skilful playmaker Granit Xhaka and winger Xherdan Shaqiri.

Blerim Dzemaili and Valon Behrami will feature in midfield, while Steven Zuber and centre-forward Haris Seferovic will provide pace on the break.

Sweden, ranked No. 24, have probably looked even stronger in the group stage. After a 1-0 win over South Korea in their opener, the Swedes were unlucky to lose to Germany after a brilliant last-gasp Toni Kroos strike. Janne Andersson’s team then routed Mexico 3-0 to secure top spot in their group.

When the Swedes opened up against Mexico they played their best football of the tournament, so will they look to be positive against the Swiss, after seeing how Costa Rica made them suffer.

The Scandinavians will be hoping for more from forward duo Marcus Berg and Ola Toivonen, who have scored just one goal between them in Russia so far.

The team’s top scorer to date is center-back Andreas Granqvist with two goals.

COACH: Janne Andersson took the reins of Sweden after EURO 2016 and qualified for Russia by edging Italy in a play-off.

COACH: Vladimir Petkovic took charge of the team after the 2014 World Cup and steered them to qualification for EURO 2016 and then Russia.