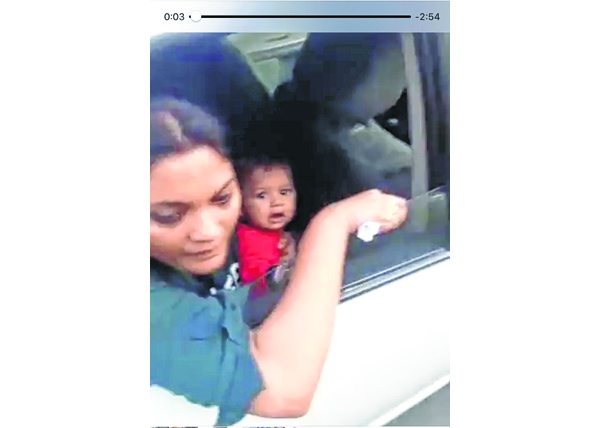 Mumbai : A traffic police constable towed away a car along with a lady who was feeding her seven months infant inside the car at Swami Vivekanand  (SV) Road at Malad (W) on Saturday. The helpless woman repeatedly pleaded with the traffic constable to stop the speeding car, since her infant was ill. However, her pleas fell on deaf ears.

As per the video that has gone viral on social media, a traffic constable reportedly called Shashank Rane was seen towing the car away at SV road.

The 20-year-old woman, whose identity was not available, was seated inside a Honda Ciaz, parked on SV road. The lady’s husband had got out of the car to make some purchases. He had committed the offence of double parking at SV road. His wife had even agreed to pay the fine, flashed what was a medical prescription from the window, and kept pleading with Constable Rane.

A good samaritan who had come to SV Road for some work intervened and kept telling Rane that the lady was feeding the child inside the car since it was ill and so she repeatedly kept requesting him to stop the car.

Cops tow away car while woman is feeding infant .The man also questioned Rane as to why he was towing the car. He even asked the constable that since she was feeding the child, who would be responsible if it died.

The samaritan kept questioning Rane that the Mumbai public wants to know why such injustice was meted out to the lady. However, Rane refused to listen to her and mercilessly towed away the car along with another constable who was seated inside the car.

Amitesh Kumar, Joint Commissioner of Police, Traffic had said, “It has prima facie been noticed that safety of the woman and the child was endangered in the said incident. Hence, pending enquiry, the constable is being placed under suspension. Decision about departmental action shall be taken after the enquiry report is received,” said Joint CP traffic Amitesh Kumar.