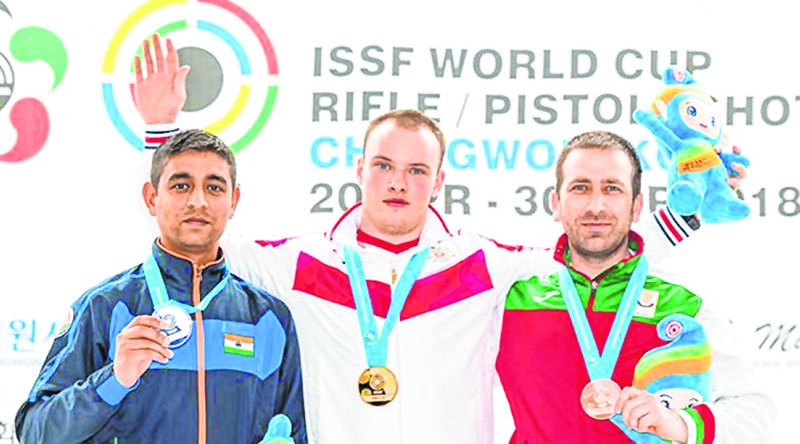 CHANGWON - APRIL 24: (L-R) Silver medalist Shahzar RIZVI of India, Gold medalist Artem CHERNOUSOV of the Russian Federation and Bronze medalist Samuil DONKOV of Bulgaria pose with their medals after the 10m Air Pistol Men Final at the Changwon International Shooting Range during Day 3 of the ISSF World Cup Rifle/Pistol/Shotgun on April 24, 2018 in Changwon, Republic of Korea. (Photo by Nicolo Zangirolami) |

Rizvi won the silver in the 10m air pistol event on day three of the year’s second World Cup (Rifle/Pistol/Shotgun stage). He missed the gold by 0.2 points to Russia’s Artem Chernousov. Samuil Donkov of Bulgaria won the bronze.

“Happy Bday to legend & inspiration to every sport person @sachin_rt (Sachin Tendulkar) sir. And what a day I myself have won Silver Medal in #ISSFWC changwon (KOR),” Rizvi tweeted.

In the 24-shot final, Rizvi was 0.2 adrift of the Russian before the final shot. Both delivered scores of 10.0 to ensure that the order remained intact.

Artem finished with a score of 240.0 and Rizvi shot 239.8. Bulgarian Samuil Donkov was eliminated in bronze medal position after the 22nd shot on a score of 217.1.

The men’s 10m air pistol saw many a big names fall by the wayside in the 87-strong qualification field.

Rizvi shot a score of 582 out of 600 to make it to the eight-man final in the sixth place. However, CWG gold-medallist Rai and bronze-medallist Mitharwal finished 38th and 11th with scores of 575 and 581 respectively.

In the Men’s Trap, India’s Manavjit Singh Sandhu shot 117 out of 125 in qualification to be the best Indian finisher in 24th spot, while Kynan Chenai shot 115 to end in 36th place.

Zoravar Singh Sandhu was further back in 41st on a score of 114.

With Rizvi’s silver, India got onto the board at the Changwon International Shooting Centre with eight more finals left to play over the next five competition days.