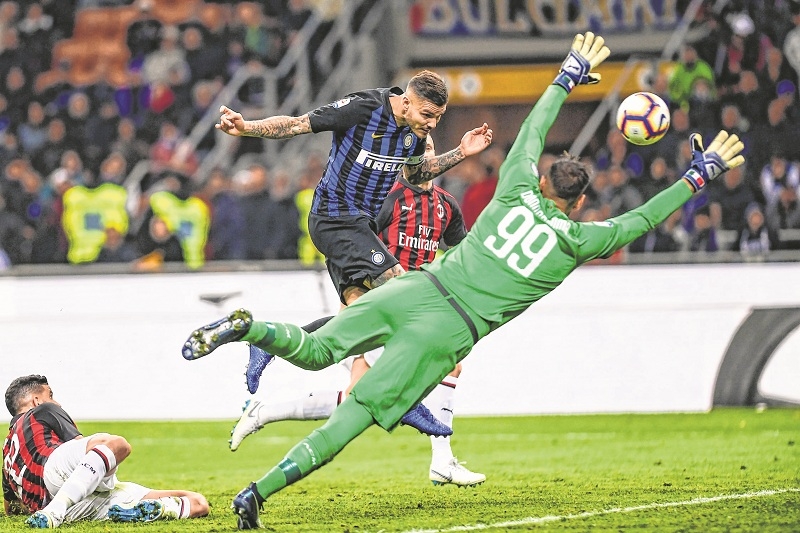 Rome:  Captain Mauro Icardi struck a dramatic injury-time winner as Inter Milan stunned AC Milan 1-0 in the derby at the San Siro to retake third place in Serie A. The Argentinian pounced on a mistake by goalkeeper Gianluigi Donnarumma to nod home in the second minute of added time after an otherwise forgettable match, leaving Gennaro Gattuso’s Milan without a win in the last five league derbies.

But Inter continued their recent resurgence under Luciano Spalletti after finishing fourth last term to qualify for the Champions League for the first time since 2011-12, moving to within six points of leaders Juventus, after their 1-1 home draw with Genoa on Saturday. “I came here to win, not to just sit on a bench for a season and try to bring home a salary,” former Roma coach Spalletti told Sky Sport Italia. “I came here to organise the future of Inter and the players must do the same. “I liked that after the final whistle, Icardi said we must find consistency and keep pushing. Inter chose us to bring this side back to the level that the fans deserve.”

There was an injury blow for Inter ahead of Wednesday’s Champions League clash against Barcelona, though, with Radja Nainggolan substituted midway through the first half after tangling with AC midfielder Lucas Biglia. “Nainggolan has been chopped down,” added Spalletti. “We have to take him to the hospital and see. He won’t be with us for a while.” AC Milan remain down in 12th after seeing their eight-game unbeaten run in all competitions ended.

Icardi had the ball in the net early on, but the striker’s effort was ruled out for offside after a check with VAR. Although the opening stages of the game were not overflowing with attacking quality, there was plenty of niggle, with Biglia left incensed after he was booked despite appearing to have been stamped on by Nainggolan before the Belgian hobbled off. Nominal home side Inter looked the more likely to find a breakthrough in the first-half.