Search continues for 10 missing US sailors 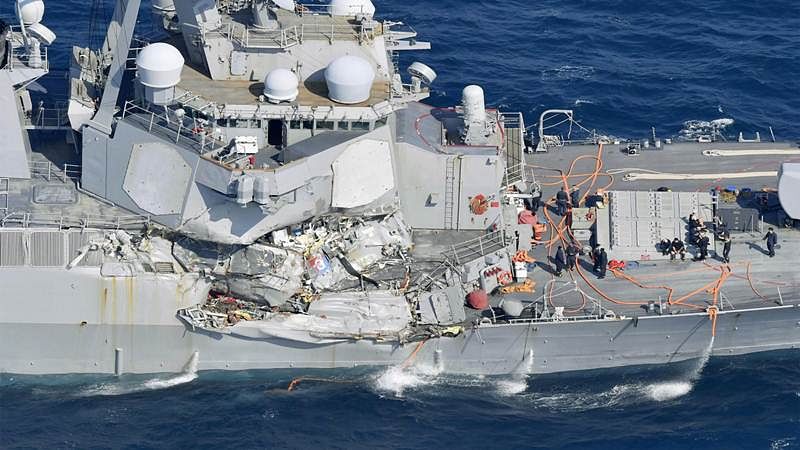 Singapore: Search operations continued on Tuesday to locate the 10 American sailors who were reported missing after a collision between the US destroyer USS John S. McCain and a merchant vessel in waters near the Strait of Malacca. The search operation involves aircraft from the amphibious assault ship USS America, along with coordination from local authorities, including ships and planes from the Malaysian and Singaporean Navies, the US 7th Fleet said in a statement.

The Royal Malaysian Navy contributes the KD Handalan ship, two coastal patrol craft, and two Malaysian Maritime Enforcement Agency vessels, while Singapore brings the Noble Pearl and Noble Knight patrol ships to the rescue operation, according to the statement. In addition to the 10 missing sailors, the US Navy said five were injured in the collision. Four of those were flown to a hospital in Singapore with non-life threatening injuries.

The US Navy ship arrived on Monday evening at Singapore’s Changi Naval Base, where crew members began the task of pumping water out of the ship and restoring its auxiliary systems, in addition to assessing the damage in the hull by divers, the statement said. The search for the missing sailors is centred on an area east of the Straits of Malacca, near the Singaporean island of Pedra Branca.

The collision marks the fourth incident involving a US Navy warship in the Pacific this year. On June 17, the USS Fitzgerald collided with a container ship off the coast of Japan. The incident resulted in the deaths of seven US sailors. The Fitzgerald will be taken to the US for repairs. On May 9, the guided missile cruiser USS Lake Champlain was struck by a small fishing boat off the Korean Peninsula. In late January, the guided missile cruiser USS Antietam ran aground while trying to anchor in Tokyo Bay.

HomeCmcmSearch continues for 10 missing US sailors