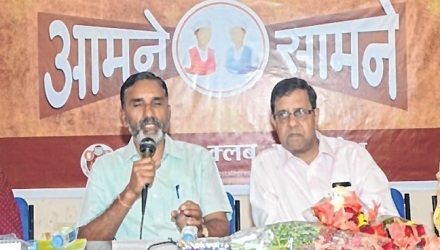 Established on the grounds of protest against Atrocity Act and caste-based reservation, SAPAKS Party is “assured” of getting the magical figure, to get to power in the state, in the coming elections. National Convenor SAPAKS Party Hiralal Trivedi was hopeful that his party would get at least 116 seats in the state and will come to the power with majority. “We are contesting elections on 230 seats and will get at least 116 seats. We are getting support from all the communities and not only from the upper caste,” Trivedi said while addressing the media during a meet to press here, on Wednesday.

SAPAKS Party chief also claimed that people from BJP and Congress both are supporting them and many are willing to join their party. “Many are willing to join us because of the issues we have raised while many have assured to support us from outside,” he added. Trivedi also added that they had to establish themselves as political party or else no major parties would take them seriously. Talking about allegations of major political parties for working as B team for them, Trivedi said,

“BJP said that we are Congress’ agent while Congress said that we are BJP’s B team. These allegations are enough to clear our status in the state. Both parties are afraid of us and are heaping baseless allegations to defame us.” Replying over no registration to their party by Election Commission, Trivedi said, “We have applied for registration as a political party and we will get it soon. We have asked the EC to give us a one-time symbol for contesting the polls.” Name of more than 80 candidates have been selected and the party has directed the candidates to start campaigning as SAPAKS Party will release names of all the candidates together by November 2.

[alert type=”e.g. warning, danger, success, info” title=””]A stir is born
Due to the extension in reservation for the benefit of political parties, a new born has got the tag of reserved or unreserved category child. “Government is running more than 130 schemes on caste basis which is against our Constitution. We have same rights for all then why there is difference due to quota categories.”[/alert]