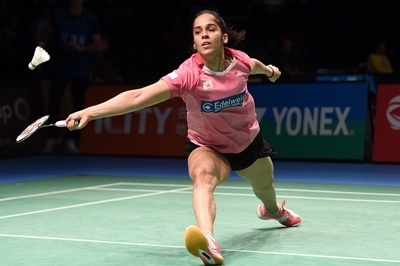 Saina Nehwal of India hits a return to Wang Yihan of China during their women's singles semi-final at the Australian Open Badminton tournament in Sydney on June 11, 2016. / AFP PHOTO / SAEED KHAN / IMAGE RESTRICTED TO EDITORIAL USE - STRICTLY NO COMMERCIAL USE |

Sydney : Kidambi Srikanth and B Sai Praneeth eked out thrilling victories in the men’s singles second round to set up an all-Indian quarterfinal clash at the USD 750,000 Australian Super Series, here on Thursday.

After this win, Srikanth had taken his head-to-head record against the Korean to 4-4. “In the third game I thought I have to get the extra shuttle, that worked for me,” said Srikanth.

“He’s someone who doesn’t attack too much, just keeps the rally going. You have to be more steady than him or you have to crack him. In these conditions it’s hard to go on all-out attack. My training is paying off. I’m really confident about my fitness.”

In another match, Sai Praneeth staved off a challenge from China’s Huang Yuxiang 21-15 18-21 21-13 in a match that lasted 64 minutes. The Indian had beaten the Chinese at the 2015 US Open in their only meeting.

Interestingly, Srikanth and Praneeth had clashed in the final of Singapore Open in April with the latter emerging victorious.

In the women’s singles, fifth seed Sindhu defeated China’s Chen Xiaoxin 21-13 21-18 in 46 minutes. She will clash with World No. 1 and top seed Tai Tzu Ying of Chinese Taipei.

Sindhu has lost six times to Tai Tzu, while beating her thrice, which included a victory during the Rio Olympics.

The former World No. 1 has defeated Sun six times, including a win at the finals in the last edition of the Australian Open.