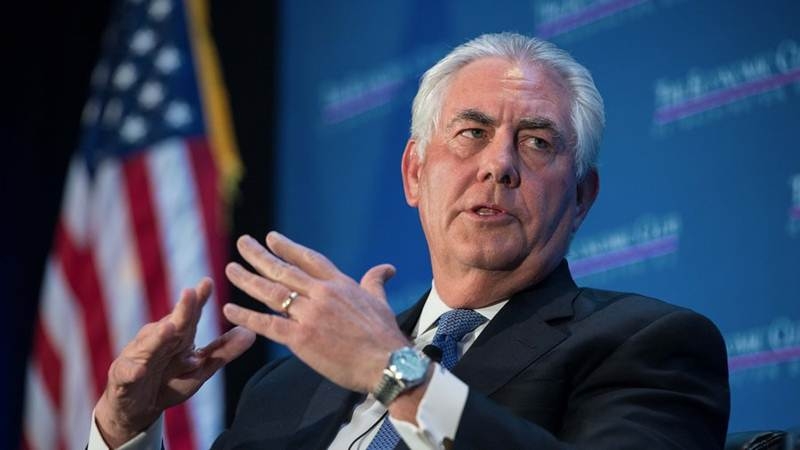 Washington: Sacked US Secretary of State Rex Tillerson has warned of Russia’s “troubling behaviour and actions” in a parting statement after being fired by President Donald Trump.

Speaking to reporters at the Department of State, Tillerson said good work had been done to have better relations with China, and rein in North Korea’s nuclear weapons programme, the BBC reported. However, the former Secretary of State also added: “Much work remains to respond to the troubling behaviour and actions on the part of the Russian government.

“Russia must assess carefully as to how its actions are in the best interest of the Russian people and of the world more broadly. Continuing on their current trajectory is likely to lead to greater isolation on their part, a situation which is not in anyone’s interest.” Sounding breathless and looking shaken, Tillerson said he had spoken to the President to ensure clarity in the days ahead. He pointedly failed to thank Trump or praise his policies.

Although Tillerson will not officially leave until March 31, his deputy John Sullivan would take over running the State Department pending the confirmation of Mike Pompeo. Trump fired Tillerson via Twitter on Tuesday, naming CIA Director Pompeo as his replacement. He also named Gina Haspel as the first female director of the Central Intelligence Agency.  Tillerson, the former ExxonMobil chief, had a series of public rifts with the White House after being appointed last year.

Speaking to reporters outside the White House Trump on Tuesday said his differences with Tillerson came down to personal “chemistry”. “We got along actually quite well, but we disagreed on things. When you look at the Iran deal, I think it’s terrible. I guess he thought it was OK.”  “With Mike, Mike Pompeo, we have a very similar thought process. I think it’s going to go very well,” Trump said.

“What is most important is to ensure an orderly and smooth transition during a time that the country continues to face significant policy and national security challenges,” Tillerson said. Tillerson is the latest in a long list of senior officials who have either resigned or been fired since Trump took office. The White House and Tillerson have had a series of public disagreements – and that continued until the very end, the BBC report added. Both sides have offered different accounts of when the Secretary of State was told he was being fired.