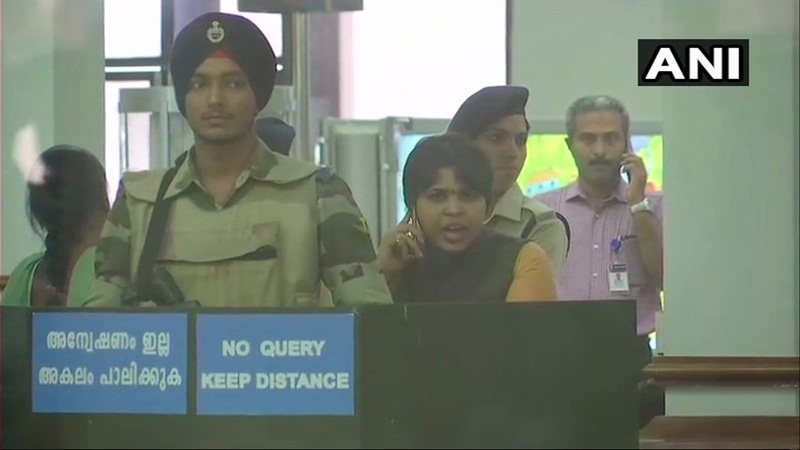 Kochi: Amid high security, the Sabarimala temple re-opens Friday evening for the two-month long pilgrim season, even as Ayyappa devotees are firm against permitting entry of menstrual age women into the shrine. There was high drama at the Nedumbassery Airport in Kochi when social activist Trupti Desai, who has vowed to offer prayers at the hill shrine, along with six other young women associates, was blocked from leaving for Sabarimala as a large number of devotees staged a “nama japam” protest clapping hands and chanting ‘Swamiye Ayyappa’.

Desai and her associates have been held up inside the airport for over seven hours. Police in large numbers were present in the domestic terminal of the airport to deal with the situation. While the devotees are firm that she would not be allowed to step out of the airport, Desai maintained that there was no question of going back without having darshan at the temple, which opens for the third time after the Supreme Court order on September 28 allowing all women to enter the famous shrine.

There is heavy deployment of police personnel in and around Sabarimala temple as it opens at 5 pm this evening for the “Mandala Makkaravillakku” puja in the backdrop of protests witnessed during the previous two occasions when the shrine opened.

IGP Vijay Saleem has asked police personnel to follow strict dress code at Sabarimala, while exemption has been given to cops at the holy 18 steps. Over 15,000 personnel, including women police personnel and 860 women civil police officers, would be deployed during the season, when lakhs of devotees from different parts of the country are expected to throng the shrine.

Prohibitory orders under Section 144 CrPC banning assembly of four or more people is also in force in and around Sabarimala from midnight Thursday for a week. Meanwhile, heavy rains are lashing Sabarimala and nearby areas and devotees have not yet been allowed to leave for Pamba from here, a key base camp enroute to the temple.

Kerala State Road Transport Corporation (KSRTC) buses will transport the pilgrims to Pamba, about 20 km from here, and no private vehicles will be allowed. This is the third time the shrine is opening since the apex court lifted the age-old ban on entry of women in 10-50 age group, though no girl or woman pilgrim in the age group could offer prayers so far following stiff resistance by devotees and activists, opposing any change in the temple traditions.

Kochi: Trupti Desai, founder of Bhumata Brigade, having breakfast at Cochin International Airport as she hasn’t been able to leave the airport yet due to protests being carried out against her visit to #Sabarimala Temple. #Kerala pic.twitter.com/ILDV7silTx

As consensus eluded a crucial all-party meeting called by Chief Minister, Pinarayi Vijayan Thursday to resolve the issue, Travancore Devaswom Board (TDB) which manages the shrine, is meeting legal experts today on the possibility of filing a petition in the apex court seeking time to implement the September 28 order.

At Thursday’s meeting, the Kerala government had maintained that it had no other option but to implement the September 28 Supreme Court order, following which the opposition had walked out in protest describing the meeting as a ‘farce’. Frenzied devotees had prevented at least a dozen women in the menstrual age group from entering the temple when it opened for five days last month and two days earlier this month for monthly and special puja.

The devastating deluge in August had destroyed most of the infrastructure facilities at Pamba. Though the TDB has said adequate arrangements have been made, pilgrims have complained that toilets and drinking water facilities were few and far between.