Sabarimala row: Over 2,000 people arrested in connection with protest against women’s entry 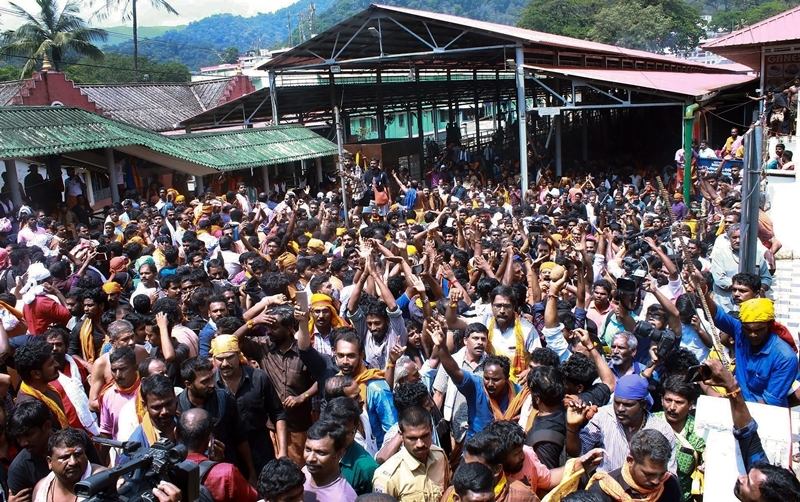 Kochi: The crackdown on protesters who prevented women from the hitherto banned age group from entering the Sabarimala temple in Kerala has crossed 2,000 arrests in just two days, police said on Friday.

In the last 12 hours, over 700 people from Pathanamthitta district — where the temple is located — as well as Thiruvananthapuram, Kozhikode, Ernakulam and other places have been arrested, Director General of Police Loknath Behra told the media here.

A total of 2,061 people across the state have been arrested since Chief Minister Pinarayi Vijayan chaired a high-level meeting with police officials and ordered the action to begin on Thursday.

A total of 452 cases have been registered against 2,300 people for defying the September 28 order of the Supreme Court allowing women of all ages to visit the temple. The police chief said the crackdown would continue.

“Cases have been registered as that’s the way it should be done. We have also decided to set up a Special Committee to see that the upcoming festival season (starting on November 17 for two months) does not see a repeat of the situation in October,” said Behra.

to ensure that the jails were not overcrowded, at least 1,500 people of those arrested have been let off on bail. The rest have been sent to various jails. On October 29, Vijayan will review with police officials the action taken against Sabarimala protesters.

The arrests became a certainty after the police released pictures of over 200 people who were blamed for attacking the police, media and pilgrims since the Lord Ayyappa shrine opened for the first time on October 17 after the apex court verdict. The Supreme Court had overturned a ban on women of menstrual age (10-50 years) from entering the hilltop temple where celibate deity Lord Ayyappa is worshipped.

On October 17, the temple opened at 5 p.m. for the five-day monthly pujas. However, the protesters ensured that no girl or woman in the barred age group could enter sanctum sanctorum till October 22.

“The Chief Minister is unnecessarily trying to create unpleasant situations by appointing CPI-M activists to take on the devotees.

“The Travancore Devasom Board (TDB) has turned out to be a complete failure and hence it should be disbanded,” he said.

Over the years, ahead of the festival season, the TDB appointed people on a temporary basis to look after various tasks in the temple town to facilitate a smooth pilgrimage. Following last week’s incidents, there has been a drastic drop in the number of pilgrims — and revenue.