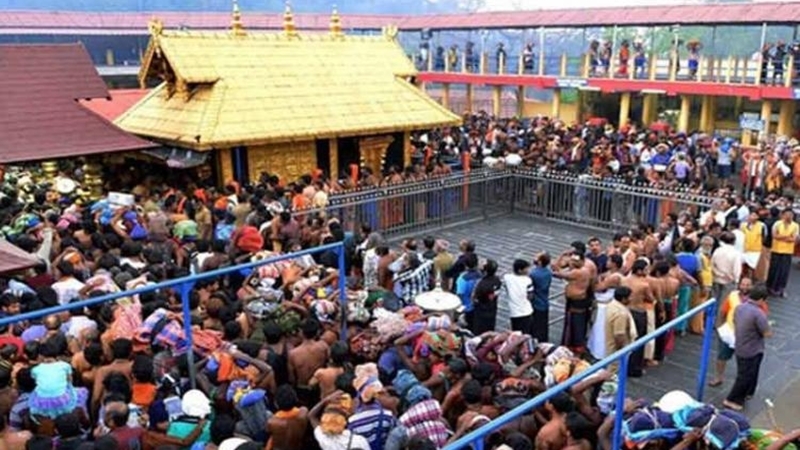 Thiruvananthapuram: Ahead of Sabarimala Temple‘s reopening today, authorities have imposed Section 144 in the towns of Nilakkal, Pamba, and Sannidhanman as a precautionary measure.

The section of Criminal Procedure Code (CrPC), which prohibits assembly of more than four people at a place, has been put in place as the state braces for a bout of fresh protests against entry of women into the hill shrine, which is set to open today for the two-month-long annual Mandala Makaravilakku festival.

Social activist and founder of Bhumata Brigade, Trupti Desai, reached Cochin this morning to visit the Temple but has been unable to exit the Cochin International Airport due to protests being carried out against her visit.

“We reached Cochin Airport at 4:30 am. Protests were being held outside. We booked taxis 2-3 times but drivers have been threatened that their vehicle will be vandalised if they offer us a drive. Police have said that we can’t go outside now,” said Desai as she was unable to carry on with her journey.

She asserted that she will not return unless she visits the temple. “Police tried to evacuate us from another gate but protesters were there as well. Does this mean protesters are scared that we’ll reach Sabarimala once we reach Nilakkal? Or are they trying to scare us? We won’t return until we have darshan,” she said.

Trupti on Wednesday wrote a letter to Kerala Chief Minister Pinarayi Vijayan, stating that she would not leave the state if she were not allowed to enter the Sabarimala Temple and had also asked for security during the visit.

To attain a common ground on the Sabarimala row, Kerala CM Pinayri Vijayan called for the all-party meeting on 15 November. However, the opposition parties in the state- Congress and the BJP- walked out of the meet.

On 28 September, the Supreme Court quashed the age-old ban on entry of menstruating women into the Temple, by allowing women of all ages to worship at the shrine. This is the third time that the Temple will open after the top court lifted restrictions. So far 3,505 protesters have been arrested and around 529 cases were registered in connection with a series of incidents of violence in the state after the opening of the temple gate in October.