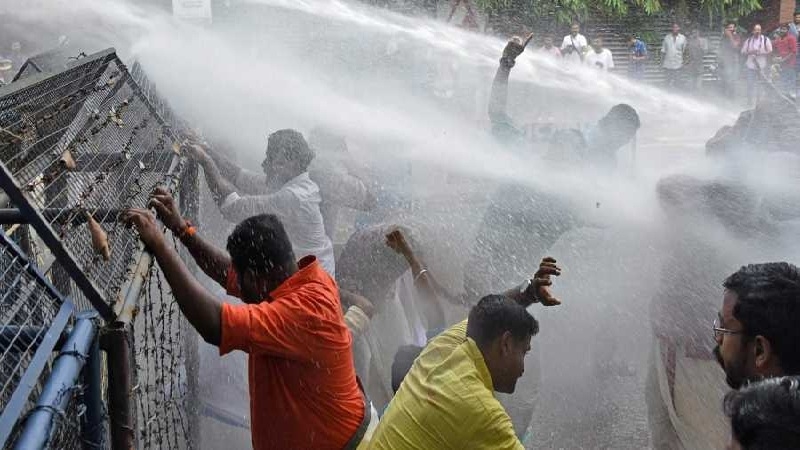 Chanting the ‘Swamiye Saranam Ayyappa’ mantra, the right-wing activists marched to the minister’s house, protesting the CPI(M)-led LDF government’s stand over the issue and tried to break the barricades put up by police. As the situation went out of control, police first used water cannon and then burst tear gas shells to disperse the unruly crowd.

Later, the agitators squatted on the road and held a protest meeting against the Left government’s decision to implement the Supreme Court order, permitting women of all age groups into the Lord Ayyappa shrine at Sabarimala. The sit-in dharna by activists of the ‘Save Sabarimala Forum’ and ‘Adivasi Samrakshana Samithi’, demanding steps to protect the tradition and rituals of the hill shrine continued for the fourth day at Nilackal in Pathanamthitta district.

Devotees belonging to different Hindu outfits marched to the protest venue at Nilackal, the base camp of Ayyappa devotees visiting Sabarimala during the festival season, and expressed their solidarity with the agitators. Similarly, a group of devotees continued their protest in front of the Secretariat here, demanding that the LDF government file a review plea against the apex court order.

BJP state president P S Sreedharan Pillai, who addressed the ‘long-march’ launched by the NDA with the slogan of ‘Save Sabarimala’ at Noornad in Alappuzha district, claimed the march got massive support from the general public. The ‘long march’ started Wednesday from Pandalam, where Lord Ayyappa is believed to have spent his childhood, would end at the state capital with a massive demonstration on October 15.

Meanwhile, Surendran attacked the BJP and said the saffron party and the Sangh outfits had “hijacked” the agitation of Lord Ayyappa devotees. He also said the ongoing agitation by the right-wing outfits was for “political gain” and asked them to withdraw from the stir.
The minister also said the march resembled the ‘Ram Rath Yatra’ taken out by the Sangh over Ayodhya issue in 1990.

Seeking to turn the tables on Rashtriya Swayamsevak Sangh on the Sabarimala issue, he claimed that hardcore Sangh leaders had moved the Supreme Court 12 years ago,seeking entry of women of all ages into the hill shrine of Lord Ayyappa. He alleged that the Sangh Parivar was trying to gain political advantage by misleading people.

The ruling CPI(M)-headed Left Democratic Front (LDF) held a meeting here to chalk out the strategy to counter the alleged false propaganda against the government unleashed by the BJP and Congress on the Sabarimala issue. The LDF also alleged that the ongoing stir over the Lord Ayyappa shrine was to “destabilise” the left government.

Addressing a press meet here after a LDF meeting, its convener A Vijayaraghavan said the nature of the stir, which included blocking ministers’ convoys, “insulting” chief minister and attacking Travancore Devaswom Board offices, indicated that the effort was to dislodge the government.

Alleging that the stir was to create trouble at a time when the LDF government was being praised for its relief work after the massive floods in the state in August, he said the opposition parties were using the Supreme Court verdict (on Sabarimala) as a tool to attack the government. With a view to countering the “false propaganda” unleashed by the Opposition over the issue, LDF would convene public meetings in all 14 districts this month to explain the stand of the government, he said.