Russia is off the roller coaster 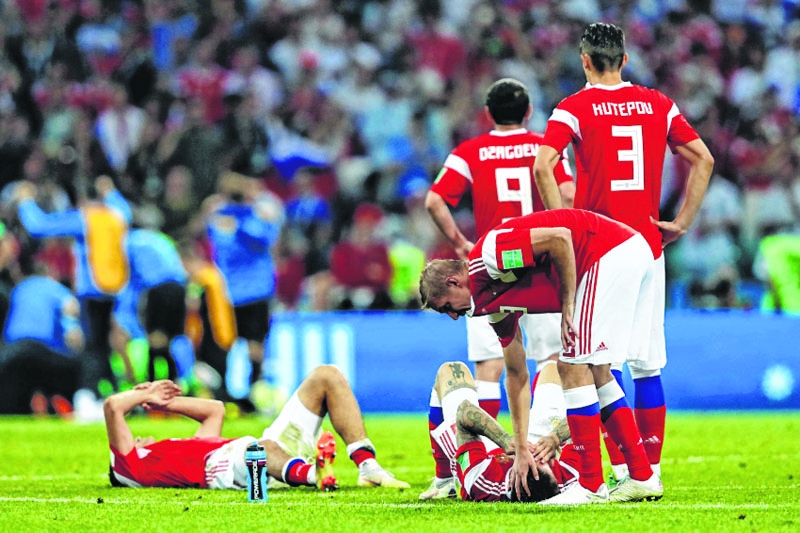 Russia's players react to their loss during the Russia 2018 World Cup quarter-final football match between Russia and Croatia at the Fisht Stadium in Sochi on July 7, 2018. Croatia beat Russia 4-3 on penalties on Saturday to set up a World Cup semi-final against England after a dramatic match full of twists and turns. / AFP PHOTO / Adrian DENNIS / RESTRICTED TO EDITORIAL USE - NO MOBILE PUSH ALERTS/DOWNLOADS |

The impassioned shouts of “Ros-si-ya” died away on the streets and tears filled the stadium as Russia bowed out of their home World Cup in the cruellest fashion: on penalties.

The men in red exceeded the wildest expectations by coming within a penalty kick and a save against Croatia of making it into the semi-finals for the first time since 1966.

They lost the quarter-final shootout 4-3 after extra-time ended with the sides deadlocked at 2-2 in the Black Sea resort of Sochi. It was that close — and it all ended just as the nation was starting to believe.

“We leave the tournament with tears in our eyes but our heads held high,” the team tweeted as the stadium emptied of the 45,000 or so who had lost their voices cheering them on.

They had reason to be proud. Russia were the lowest-ranked team entering the tournament and many in the sceptical media thought they would be lucky to win a game. They trudged off the pitch after making it to the quarter-final for the first time in 48 years.

A semi-final was within grasp and the loss stung.

But the Russian team showed heart and won what seemed like the entire nation’s gratitude.

“The champions of our hearts,” the popular Sport Express daily said in a headline. Then it paid them the highest compliment possible by declaring: “Russia knows how to play football.”

Fans who had been dancing in the streets after a heart-pounding shootout win over 2010 champions Spain in the last 16 last Sunday were gloomy but grateful. The nation was mourning on Saturday — but also paying its respects.

Chants of “Mo-lod-tsy” — an almost untranslatable word of praise and thanks that roughly means “Good job, guys” — echoed across the dark streets of Moscow and other cities.

“What can I say? It’s a pity we are out of this tournament but I am very proud of my team,” said Muscovite Alexander Khramoichenkov.

Prime Minister Dmitry Medvedev called the team’s performance “magnificent” after the watching the game from a VIP box with Croatian President Kolinda Grabar-Kitarovic.

He came down into the players’ locker room and suggested that Russian football would never be its disappointing old self again.

“We will simply have a different type of football after this,” he said.

“I am absolutely certain of this.” But coach Stanislav Cherchesov — his moustache becoming the unofficial symbol of Russia’s Cinderella waltz through the tournament — seemed visibly distraught. “I am still not myself yet,” he admitted after listening to a press conference question and then being unable to say a word.