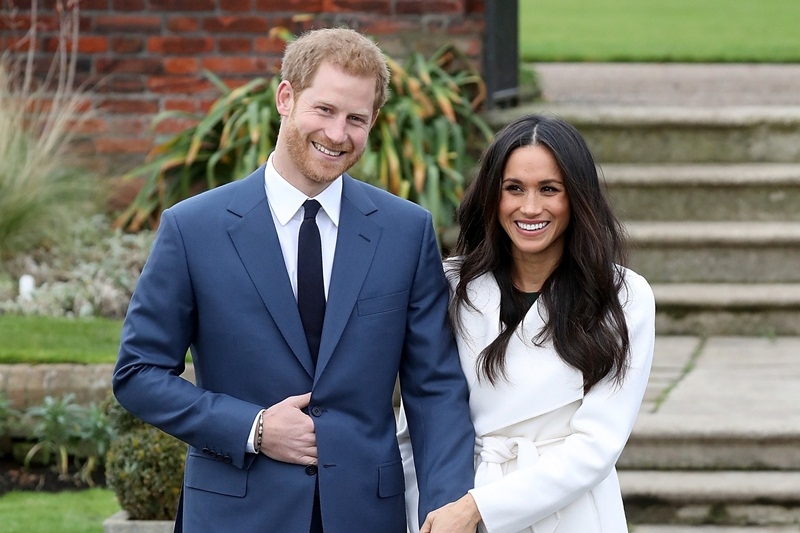 The royal wedding of Meghan Markle and Prince Harry will take place on May 19, 2018, Saturday, at St George’s Chapel in Windsor. The ceremony will be followed by a carriage procession and two receptions. Thousands of people will gather on the streets of Windsor to get a glimpse of the royal couple, while millions around the globe will watch the ceremony live on television and internet. The announcement of their wedding was confirmed by the Kensington Palace via Twitter on December 15. The couple has broken the tradition by choosing to wed on a Saturday, as royal weddings usually take place on weekdays. The wedding date falls on the same day as the FA Cup final at Wembley, a match the Duke of Cambridge more often attends as the President of the Football Association to present the trophy.

Prince Harry and Ms. Meghan Markle have chosen to release this official portrait photograph to mark their engagement. The photograph was taken by photographer @alexilubomirski earlier this week at Frogmore House, Windsor.

Royal Wedding Invitations
Following the royal tradition, the invitations have been made by Bernard Westwood. Each invite has been printed in gold and black on a thick white card with a gold trim. The details including the dress code. The guest list includes 600 people with a personal relationship to the royal family of which 200 are invited to the evening reception. Around 1,200 people are invited to greet the couple outside Windsor castle.

The invitations follow many years of Royal tradition and have been made by @BarnardWestwood. They feature the Three-Feathered Badge of the Prince of Wales printed in gold ink. pic.twitter.com/cd7LBmRJxO

Royal Wedding Gifts
Instead of the wedding gifts, Prince Harry and Meghan Markle have asked for donations for seven charities, and these include:

Royal wedding details
The marriage of Prince Harry and Markle will take place on May 19 at 12 pm in St George’s Chapel at Windsor Castle. The Queen will sign the Instrument of Consent, the official document to grant her grandson permission to marry his fiance. The expenses of the core aspects of the royal wedding that includes decorations, reception, music, and service will be taken care of by the royal family. The cake will comprise of the bright flowers of spring and will be made by Claire Ptak of the Violet Bakery. Philippa Craddock will arrange the flowers that will feature silver birch and English oak sourced locally including from Windsor Great Park. James Vivian, director of music at St George’s Chapel will direct the music for the service. Alexi Lubomirski will click the official photographs at Windsor Castle.

Royal guest list
Kensington Palace has announced that around 600 guests will be in attendance. As Prince Harry is sixth in line to the throne, he is not obliged to invite diplomats from across the globe. The number of invitees is pretty less compared to the wedding of Duke and Duchess of Cambridge attended by 1,900 guests and Queen Elizabeth II and Prince Philip attended by 2,000 guests.

Members of the public from around the UK have this week learned that they will be amongst the 2,640 people at Windsor Castle for Prince Harry and Ms. Meghan Markle’s wedding. pic.twitter.com/cjAHVEF4gu