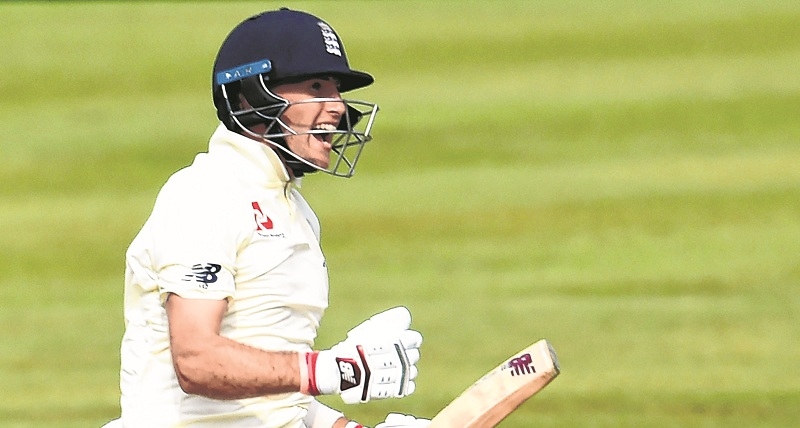 England's captain Joe Root raises his bat and helmet in celebration after scoring a century (100 runs) during the third day of the second Test match between Sri Lanka and England at the Pallekele International Cricket Stadium in Kandy on November 16, 2018. (Photo by ISHARA S. KODIKARA / AFP) |

Kandy: Captain Joe Root smashed 124 and newcomer Ben Foakes again hit valuable tail end runs to put England in command of the second Test against Sri Lanka on Friday. England reached 324 for nine — a second innings lead of 278 — when bad light stopped play for the day at Kandy. Foakes was batting on 51 alongside James Anderson on four.

Spinner Akila Danajanya, whose action is under investigation by the International Cricket Council, claimed six wickets on the turning pitch. He trapped Root lbw and then bowled Sam Curran for nought with his next ball. Adil Rashid thwarted the hat-trick but soon fell to Dananjaya’s guile for two. It was his third five wicket haul in just his fifth Test for Dananjaya, who must rush off to Australia after the game for an ICC examination of his bowling.

He, however, could not stop Root and Foakes swinging the game. Root reached his 15th Test ton soon after tea, making the sweep and reverse sweep valuable weapons, as he hit 10 fours and two sixes in his 146-ball knock. Earlier, left-hander Rory Burns registered his maiden Test half-century in just his second match. He was trapped lbw off Malinda Pushpakumara for 59.