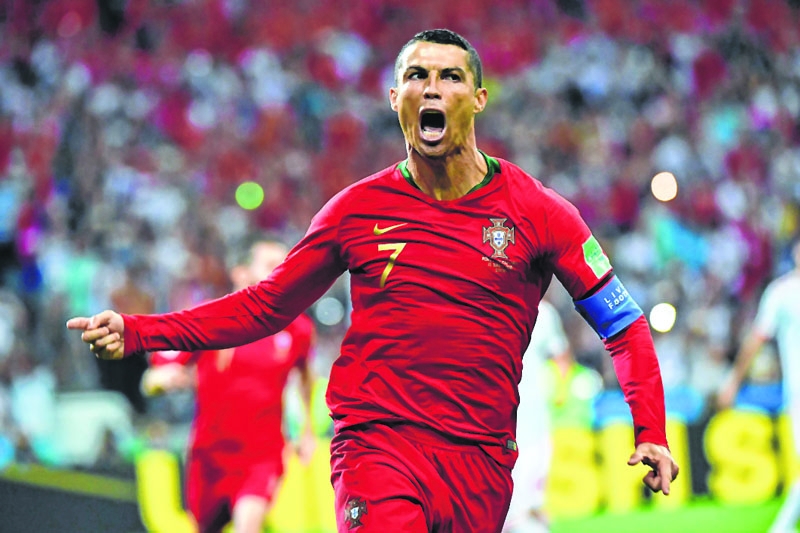 Sochi : Cristiano Ronaldo expressed his delight at setting another record in his remarkable career as his hat-trick against Spain on Friday allowed him to become just the fourth player to score in four World Cups.

“I am very happy, it’s a nice personal record to have, one more in my career,” said the Portugal captain, whose goals secured a 3-3 draw for the European champions in a remarkable World Cup Group B clash with neighbours Spain in Sochi.

Ronaldo had twice put Portugal in front, and yet he was required to score a superb 88th-minute free-kick to grab a point after Spain had fought back brilliantly.

The 33-year-old joins an elite cast of players who have scored in four World Cups, following in the footsteps of Pele and German duo Uwe Seeler and Miroslav Klose.

But he added: “For me the most important thing is to emphasise what the team did against one of the favourites to win this World Cup.

“It was a fair result, we are very happy because the game was about to finish and then we managed to grab a draw.”

Ronaldo had only scored three goals in total in his last three World Cups, so managed to double his tally in one night here.

He has also now scored in eight consecutive major tournaments, going back to Euro 2004, when as a teenager he helped Portugal all the way to the final as hosts.

The agreement, which is still to be ratified, will likely come with a two-year jail term — although sentences of up to two years are not generally served in Spain.

But Ronaldo was clearly not distracted by that. His focus is fully on the World Cup, with Portugal’s next match against Morocco in Moscow next Wednesday.

“The World Cup has only just begun. Portugal are hoping to get through the first round, and we know how hard the group stage is,” he said.