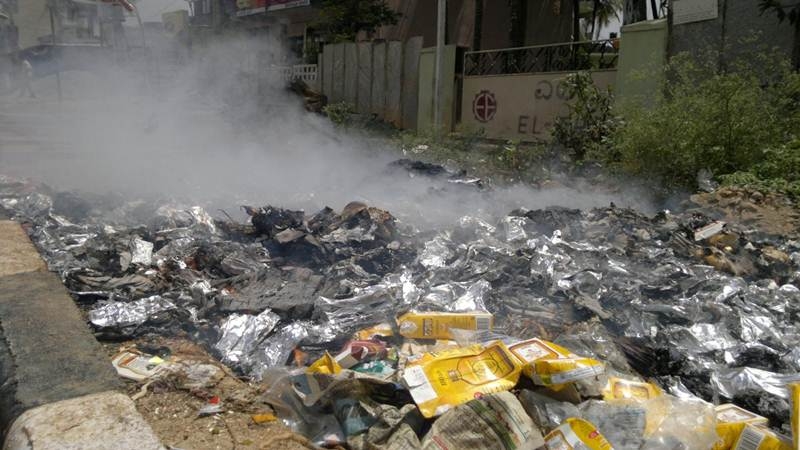 New York: The smoke from burning roadside trash piles – a common practice in India – contains such high concentration of particles that it can lead to 1,000 times more toxic exposures to nearby humans, warns a study by researchers at Duke University in the US, according to IANS.

“From our tests, we found that somebody standing near one of these fires is getting a dose of toxins 1,000 times greater than they would from the ambient air,” said Professor Michael Bergin. “To put it another way, a person would only need to breathe these particles for a minute to get an entire day’s worth of hazardous particulate matter,” Bergin noted.

For the study, published in the journal Atmospheric Environment, the researchers took samples of emissions coming from 24 roadside garbage fires in urban Bengaluru. They then tested the collected particles for toxicity through both a chemical analysis and by applying them to cultured cells.

While the results showing that the high concentrations of particles near the fires resulted in 1,000 times more toxic exposures to nearby humans, thanks to various organic compounds burning in each fire, the test filters turned different colours, making a rainbow of toxins.

The wide variability found in the fumes likely stems from the trash piles containing many different organic and plastic materials, the researchers said. Of the nearly two billion tonnes of garbage produced worldwide each year, nearly half of it is burned for disposal, according to some estimates.

While much of this total is burned in large collection and disposal sites away from heavily populated areas, many cities and towns do not have the infrastructure in place to collect waste. “As you walk down the street in India, there are just piles of trash growing larger and larger until somebody decides to take a match to it,” lead author on the study Heidi Vreeland, a doctoral student in Bergin’s Laboratory, said.

“Even in large cities such as Bangalore, and even in the more affluent neighbourhoods, this is just the norm,” Vreeland noted. Although the results may not surprise any researchers or environmentalists, according to the study, calling attention to the fires’ toxicity is important because nearby residents might not know the fumes are hazardous.