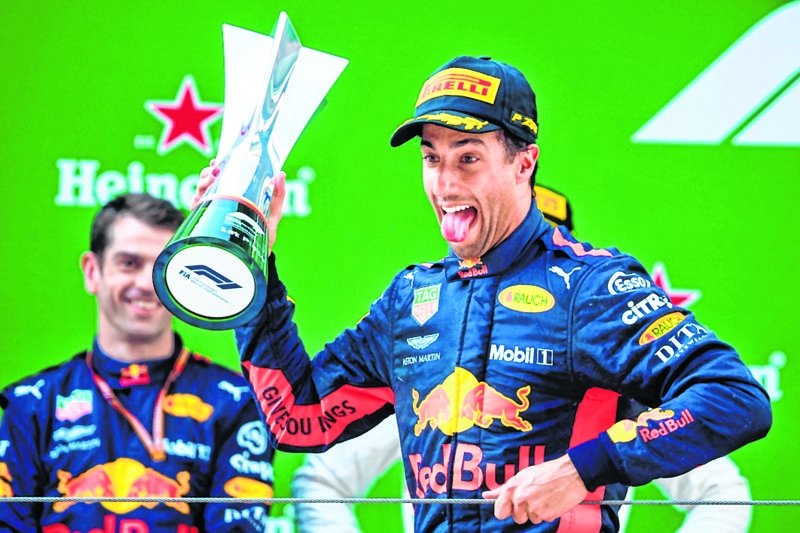 The Australian carved his way through the field from sixth place, after taking on fresh tyres under a safety car, to storm to the sixth grand prix victory of his career.

“I don’t seem to win boring races. They’re all pretty fun,” said an elated Ricciardo, who filled one of his shoes with champagne on the podium and chugged it in what has become a signature ‘shoey’ victory celebration.

Ricciardo was quick to praise his mechanics for their work on Saturday after he only made it into qualifying with seconds to spare after a blown engine in final free practice.

“Twenty-four hours ago I thought we might be starting at the back of the grid. So, firstly thanks to the boys on Saturday. Today is the real reward for that work.” Ricciardo took the lead with just 10 laps to go when he charged past race Valtteri Bottas, who finished second in a Mercedes. Kimi Raikkonen was third for Ferrari.

Championship leader Sebastian Vettel, who led from the pole until the first set of tyre stops, dropped back to finish eighth after colliding with Max Verstappen, who was penalised 10 seconds for hitting the German.

Defending world champion Lewis Hamilton crossed the line fifth behind Verstappen but was promoted to fourth after the Dutchman’s penalty was applied.

“It is disappointing. We gave it everything we had,” said Bottas. “It felt like we should have had the victory, but not today.” Red Bull’s win adds a fresh wrinkle to a season in which Ferrari had surged out in front, with Vettel stunning Hamilton and Mercedes by taking the first two races of the season in Australia and Bahrain.

Mercedes have edged in front in the constructors’ championship by a single point from the Italian team, who saw Vettel’s lead at the top of the drivers’ standings cut to nine points by Hamilton.

Ricciardo, who had to retire in Bahrain due to mechanical problems, was facing heartache for the second straight weekend after his Renault engine went up in smoke halfway through the final practice session on Saturday.

Team boss Christian Horner had said they would need a “miracle” to get running again in the two hours before qualifying began.

They barely made it, with mechanic’s seen snapping major pieces of the car’s body back into place just before Ricciardo peeled out onto the track with only about a minute to spare.

Vettel and teammate Raikkonen grabbed a lockout for Ferrari on the front row to put the pressure on Mercedes.

Vettel heading for a podium position in third on lap 43 when Verstappen slammed into his side on turn 14, sending them both spinning and several places down the race order.

It was the second straight weekend in which the hard-driving Verstappen was involved in a collision.

He and Hamilton had a run-in in Bahrain, after which the Englishman was overheard lobbing an expletive at the young Dutchman.

“I don’t think I have to say anything here,” a disgusted Vettel was heard saying over the radio in an obvious reference to the Dutchman’s aggressive style.