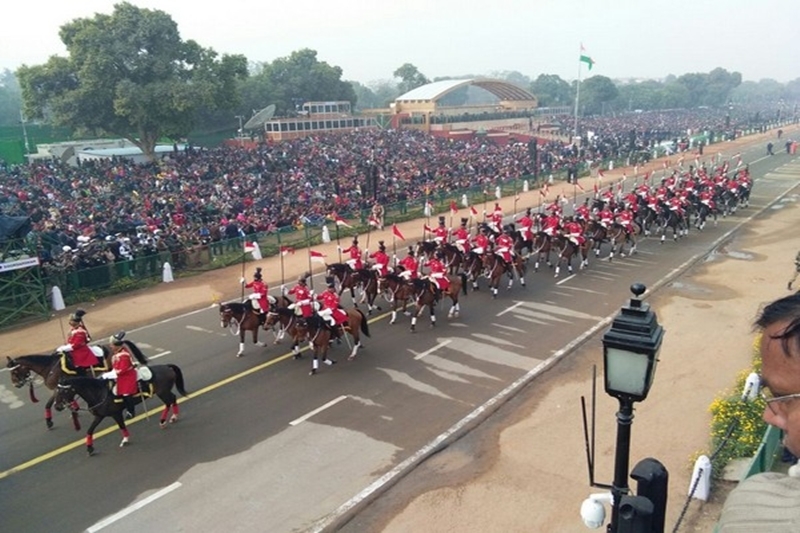 New Delhi: As the nation is all set to celebrate the 69th Republic Day on Thursday, security has been beefed up everywhere.Security forces have been deployed in numbers, to keep a check on the situations. Vehicles, in each and every police points, are being checked thoroughly. Vigilance at sensitive spots across the country have been increased to ensure safety and security.

For the first time ever, leaders of 10 Association of Southeast Asian Nations (ASEAN) countries – Thailand, Vietnam, Indonesia, Malaysia, the Philippines, Singapore, Myanmar (Burma), Cambodia, Laos and Brunei will grace the Republic Day parade as chief guests in the national capital. On the eve of Republic Day, Rashtrapati Bhawan was decorated beautifully with lights.

Rajpath will come alive on Thursday morning where the nation showcases her military might and traditions coupled with the latest initiatives and achievements along with her rich diverse social and cultural heritage. Another feather in tomorrow’s pageant will be two tableaux showcasing our historical, civilisational, educational, religious and cultural linkages with the ASEAN nations. The parade ceremony will commence at the Amar Jawan Jyoti at India Gate, where the Prime Minister Narendra Modi will lead the nation in paying homage to the martyrs by laying a wreath.
An eternal flame burns at the Amar Jawan Jyoti to commemorate the indomitable courage of the Armed Forces personnel, who have made the supreme sacrifice in the service of the motherland. The Amar Jawan, the immortal soldier, is symbolised by a reversed rifle standing on its barrel and crested by a soldier’s helmet.

Women’s Motor Cycle team ‘Seema Bhawani’ of Border Security Force will be the main attraction of the spectacle, which was raised at Central School of Motor Transport (CSMT), BSF Academy Tekanpur on 20th October 2016. The BSF motorcycle team ‘Seema Bhawani’ is led by Sub Inspector Stanzin Noryang. As per tradition, after unfurling the National Flag, the national anthem will be played with a 21 gun salute. The parade will then commence and the President will take the salute.

Tableaux from 14 States and UT, Nine Central Ministries, Departments and Central Paramilitary Force will present the varied historical, art and cultural heritage of the country. They will also showcase country’s progress in different fields, particularly floats from Karnataka, Gujarat, Tripura, Maharashtra, Assam, Jammu and Kashmir, Manipur and Kerala with their varied themes, which will be of special attraction. The floats of All India Radio, Indian Council of Agricultural Research, Income Tax Department will showcase the rapid development of some of the flagship programmes of the Government. The ceremony will end with the national anthem and release of balloons.

Rashtrapati Bhavan lit up on the eve of #RepublicDay pic.twitter.com/YrnwextwkT

#MadhyaPradesh Assembly illuminated on the eve of #RepublicDay pic.twitter.com/OcBmtDR9V7