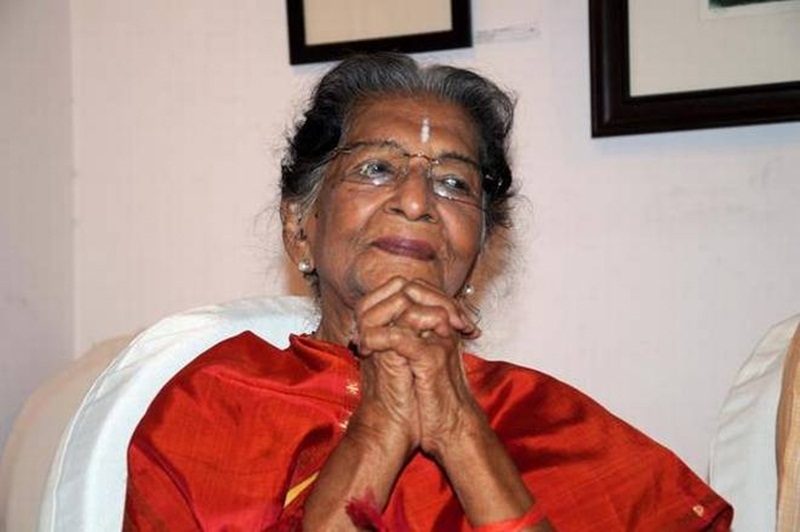 Kolkata: Eminent danseuse and choreographer Amala Shankar turned 100 today and her family members have decided to make the occasion memorable with an exhibition on her photographs and paintings. A film, starring Amala Shankar and her husband and classical dancer Uday Shankar, has also been scheduled for screening at the three-day exhibition, which begins tomorrow, her family members said. The 1948 Hindi film ‘Kalpana’, directed by Uday Shankar, revolves around a young dancer’s dream of setting up a dance academy.

The centenarian, who had been active even in her early 90s, was awarded Banga Vibhushan by the state government in 2011 for her contributions in the field of art. “Maa took part in a dance drama, ‘Sita Swayamvar’, at the age of 92. She essayed the role of the King Janaka.  She also took part in a dance piece for ‘Missing You’ the same year. It was composed by (her son) Ananda Shankar. That was her last stage performance,” her daughter and actor Mamata Shankar said.

Although age has taken a toll on her auditory faculties, she speaks when she wishes to, her son-in-law Chandrodoy Ghosh said. Besides being a dancer of repute, Amala Shankar also took interest in paintings. She was not a trained artist but her artworks were often reminiscent of Uday Shankar’s dance performances, Ghosh said. “She created her images with colours using her fingers and not brushes. For finer edges, she would use toothpicks, broom sticks and even nails. These art works were often used in some the dance dramas and shadow plays such as ‘Life of Buddha’ and ‘Ramleela'” he added.

Daughter of Kolkata-based jeweller, Amala Shankar, then Amala Nandy, met Uday Shankar in Paris in 1931, when she was just 12. Her father Akshay Nandy had gone there to attend an exhibition as a member of an Indian delegation. Uday Shankar was there at that time with his troupe, Ghosh said. “Before meeting him, Maa had thought that Baba would be an old man sporting a beard like Rabindranath Tagore. But he turned out to be a man in his early 30s,” Mamata Shankar said.

When Uday Shankar’s mother requested Akshay Nandy to leave Amala with the troupe, he agreed. “One day Baba asked her to perform a dance step which she did at ease. She was also asked to dance with a stick and she did it. That’s when he realised Maa has talent in dancing,” Mamata Shankar said. Amala Shankar’s first performance as Kaliya in ‘Kaliya Daman’ was staged in Belgium in 1931.

After returning to Kolkata, she even wrote a book on her tour of Europe. It was only after the insistence of Netaji Subhas Chandra Bose, Akshay Nandy sent her daughter to the dance institute of Uday Shankar at Almora, Ghosh said. “Uday Shankar married Amala, who was 19 years junior to her, in 1942,” he added.

Talking about her mother’s multiple talents Mamata Shankar said, the centenarian has always been a perfectionist. “Maa is a versatile woman. She never learnt to paint, much like Baba who did not have any formal training of dancing,” she said. Whatever she does, there is aesthetics in it – even in the garnishing of food prepared by her, she said. “If we are able to build on her legacy, that would be best gift for her,” she added.