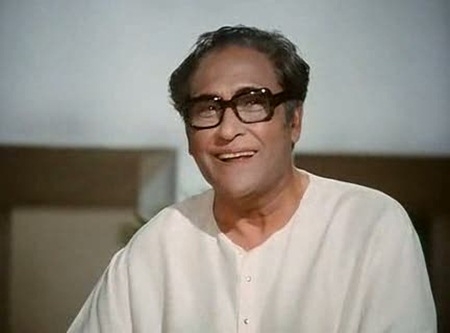 Bollywood actor Ashok Kumar fondly called as Dadamoni. His real named was Kumudlal Ganguly, was born this day in 1911 at Bhagalpur, Bihar. He had a iconic status in a Hindi film industries. An actor who capture all your attention in a single shots and promoted talents all over the world and he ruled the silver screen and melted millions heart with his strong personality.

His first big hit was ‘Achhut Kanya’ in 1936, where he paired with Devika Rani. The film was about a Brahmin boy falling in love with a girl from the ‘untouchable’ class. The film propagated Gandhi’s ideology of no class or caste division.

He was a first anti- hero of Hindi cinema. He most seen in a negative role in Bollywood. Gyan Mukherjee ‘Kismat’ in 1943 presented Ashok Ji as a pickpocket who fall in love with a girl. This was a first movie in Indian cinema grossed one crore rupee at that time.

In 60’s Ashok Ji famous songs was from the films ‘Aashirwad’ ‘Rail gaadi Rail Gaadi Chhuk Chukk’. This songs sung by himself, in his own inimitable style.

Ashok kumar famous and super hit dialogue from the Hindi cinemas are:

Also Read: Remembering Kishore Kumar on his 87 birth anniversary with his melodious songs