Release Parrikar’s video to show he is fit to govern: Congress 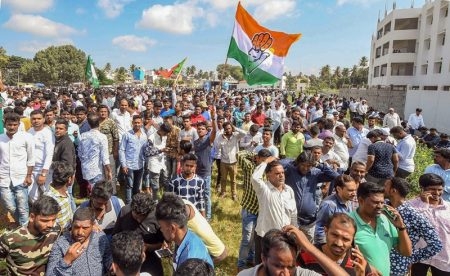 Panaji: The Congress on Friday demanded that the Bharatiya Janata Party-led coalition government in Goa prove that Chief Minister Manohar Parrikar, who is suffering from advanced pancreatic cancer for nearly eight months and has not been seen in public since October 14, is fit to govern.

Addressing a press conference at the Congress state headquarters in Panaji on Friday, party spokesperson Jitendra Deshprabhu said the Opposition party would have to approach the Court to seek directions to the government to issue a medical bulletin specifying the health of the former Defence Minister.

“At least they should release a video showing that the Chief Minister is walking, speaking and working. There is no bulletin or any doctor speaking on his health condition,” Deshprabhu said.

Parrikar has been in and out of hospitals in Goa, Mumbai, New York and Delhi. His absence has created a political leadership vacuum in Goa, even as the Opposition has demanded that he step aside to focus on his treatment.

Parrikar has not made a single public appearance since his return from Delhi’s AIIMS hospital on October 14 and is currently bedridden in a room at his private residence, which party sources said has been converted into a hi-tech medical facility, with medical and para medical staff on 24