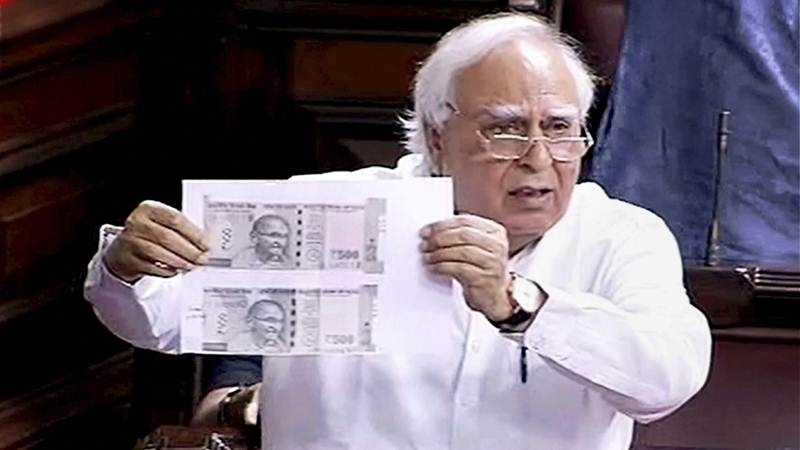 New Delhi: The Rajya Sabha was on Tuesday repeatedly adjourned over the issue of “two types” of currency notes. As soon as the House met, Congress member Kapil Sibal alleged that the Reserve Bank of India (RBI) was printing two types of Rs 500 currency notes.

“RBI prints two types of currency notes. These are of different size and different design… How is it possible?” Sibal asked, displaying images of two Rs 500 denomination notes posted on a placard.

Leader of Opposition Ghulam Nabi Azad alleged that the demonetization was the “biggest scam of this century”. Other opposition leaders including Trinamool’s Derek O’Brien, JD-U’s Sharad Yadav and Samajwadi Party’s Naresh Agrawal also sided with the Congress.

BJP Ministers protested against raising the issue citing technical grounds. Leader of the House Arun Jaitley accused the opposition of raising “frivolous” issues day after day. As the opposition members created a ruckus and the treasury benches members shouted back, the Chair adjourned the House for 10 minutes. After the break, the Congress members again trooped to the Chairman’s podium, raising slogans against the government.

Minister of State for Parliamentary Affairs Mukhtar Abbas Naqvi said that if the members want a discussion, they can give a notice. “You will get the answer,” Naqvi said.

But the opposition kept shouting slogans, forcing the Chair to adjourn the House till 12 noon. The scene was no different when the Question Hour took place at noon. A frustrated Ansari first adjourned the proceedings for 15 minutes and, then, when there was no improvement in the situation, until