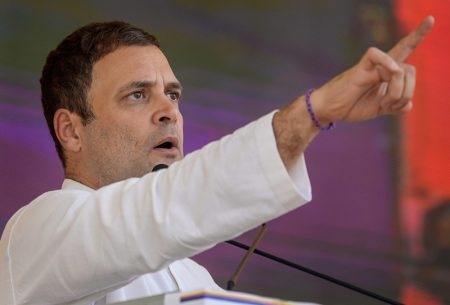 Congress president Rahul Gandhi will kick off party’s election campaigning in Ujjain division after paying obeisance to presiding deity at Mahakaleshwar temple on October 29. Preparations are in full swing for his tour programme.

Congress party has claimed that around 50,000 people from Ujjain district and nearby areas will gather to listen the party national president. The size of dome will be finalised by the SPG team which arrived here from Delhi under the leadership of AIG Vimal Panwar. Pradesh Congress Committee will decide who all will sit on dais with Gandhi.

The party has appointed several observers for the arrangements at block level. Party leaders Rajendra Bharti, Rajendra Vashist and Maya Trivedi convened meetings of the party workers to make the event a big success.

DCC spokesman Vivek Gupta informed that AICC observers Somesh Mishra and Rahula Richhariya have arrived in the city to oversee the arrangements. AICC spokesperson Priyanka Chaturvedi briefed the media about Gandhi’s programme. He will arrive on Monday at 11.30 am at DRP lines by helicopter from Indore and will straight away go to Mahakaleshwar temple. From there, he will go to Dussehra Maidan, where the public meeting has been organised at 12.30 pm. He will leave for Jhabua by helicopter at 2.20 pm.