Rahul Gandhi frames the debate for 2019 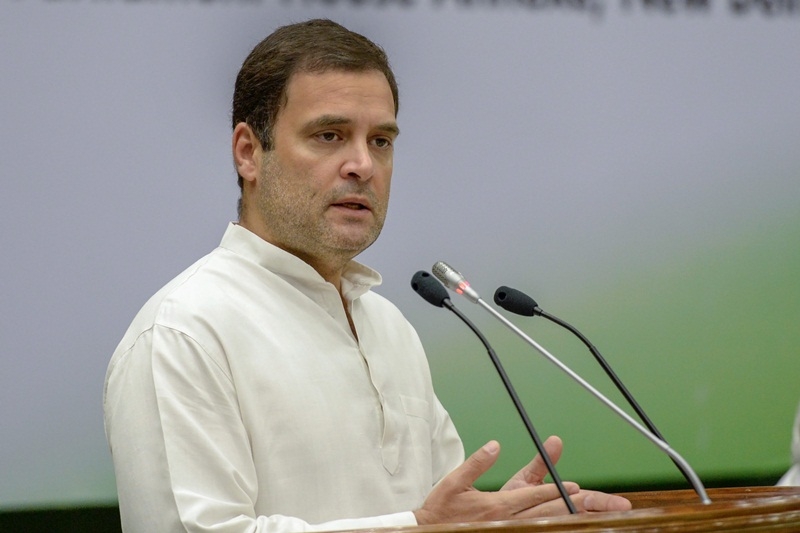 It is a message given to every candidate preparing to present an argument before an audience.  In varying words, it says: ‘Authenticity trumps everything else. Do not be forced or strained. Let it come naturally to you. Prepare, then say it with conviction’. The message is simple, but it can take time to be internalised and implemented. It is a difficult journey for some and for others, like Congress President Rahul Gandhi, it can take far too long to get it right. Training can do only so much. But there comes a time when it all falls into place and works out. That magical transformation is in the works with Gandhi and it can be seen in the ease with which he interacts, the language he speaks and the simple fact that he appears to be now, at last, enjoying the role that has been thrust on him. Gandhi’s teachers can finally say their student is showing signs of performance, a late bloomer who is now well on his way. This change on the outside is hopefully reflective of an inner struggle and journey during which the student is ready to learn, revisit beliefs and reflect on the missteps.  These are precisely the kind of steps that the BJP leadership, fixed in its ideas and smug in its beliefs, is unwilling and by now unable to take. It is amazing to see the treasury benches angry and upset and speaking in raised voices while the Opposition is happy to be smiling, polite and having all the fun while talking of the real issues of the day.

The change has been there for some time, but it broke through the barriers during the no-trust vote in the Lok Sabha, when a fairly confident Gandhi, speaking in English and Hindi, hit home with some good arguments put in simple and plain language. Then came the hug, forced on an unprepared Narendra Modi, which expectedly hit the headlines and brought the Congress President a lot of attention, not all of it desirable. It is fair to dismiss the act as a publicity-seeking gimmick, a silly gesture and a not-so-smart move, the last particularly because Gandhi did a celebratory wink as he walked back. One can almost hear Congress apologists argue that if there is a place for tricks and jumlas in Indian politics, then two can play the game.

But what is not a trick and carries the potential of a powerful framing of issues for 2019 is the message of “love versus hate”.  Captured in a line and placed on a poster that came up in Mumbai, the position is simple: nafrat se nahin, pyaar se jeetenge (We will win not with hatred but with love). Helping the message is not so much one of love shown by the Congress as that of the outpouring of hatred from the BJP, one aspect of it seen in the conspiracy of silence at lynchings in the name of protecting the cow, justification of the murderous acts by lower level functionaries and an atmosphere of fear being created among minorities across the length and breadth of India. The lynchings keep happening at regular intervals. The killing of Rakbar Khan, 28, in Alwar, Rajasthan, by cow vigilantes on July 21 is the latest, and the message being sent out is that Muslims can be seen with cows only at their peril. That the police took the cows to a shelter and then took the victim to hospital only after that tells a sordid tale of what has gone wrong at the grassroots of the nation’s administrative structure. As Gandhi correctly pointed out: “People are being killed, beaten and trampled…and the Prime Minister doesn’t speak a word.”

It is clear that Gandhi has been advised to build and harp on this message, and that he takes naturally to it, given that he carries none of the baggage and hatred that seems to fuel the more experienced in the BJP. There are signs that the Congress is already building skillfully around this narrative. At a function after the no-trust vote in Parliament, where L K Advani was present, Gandhi is reported to have remarked: “You can fight someone, but hate is an active choice you make. I disagree with Mr. Advani, I can fight him every inch, but I don’t need to hate him, I can hug him and fight him.”

This is a good position to begin the case for a change at the Centre. We can see the early signs of a theme that carries the potential of hitting it off with the electorate and setting the stage for giving the BJP a good fight, at the very least. Helping the cause, of course, are BJP leaders who appear to relish nothing other than shouting matches and can never seem to resist the temptation to score brownie points in silly debates at ugly encounters. There is a sense of fatigue at this loud, crass and uncouth ways of the ruling elite and the time is right for a more respectful discourse that the “hate v/s love” narrative seamlessly slips into.

From the Congress perspective, this is good but only a starting point. But it is too early to conclude that Gandhi is ready or that he can stitch together the alliance that will be required for a meaningful electoral challenge to the BJP. That calls for a much bigger transformation and there are few signs of that in the party just yet. The Congress and Gandhi, more because he has just about found his feet, still are comfortable and at ease with age-old players, the same stars of yesterday who were known best for their corrupt ways and backroom games – the kind that alienated the party from the voters and the nation. It is true that given the more recent excesses of the BJP and the swirl of allegations against the party leadership, the Congress misdeeds are likely to be forgotten if not excused. But the Congress leaders who brought the party down and helped hand a massive mandate to the BJP can’t advise the Congress of tomorrow. Its players must change. Gandhi is a new face. He needs new names with him. To break away from the stranglehold of yesterday’s corrupt and build a base of young leaders for tomorrow will call for a different kind and level of transformation in Rahul Gandhi.

Jagdish Rattanani is a journalist and a faculty member at SPJIMR.