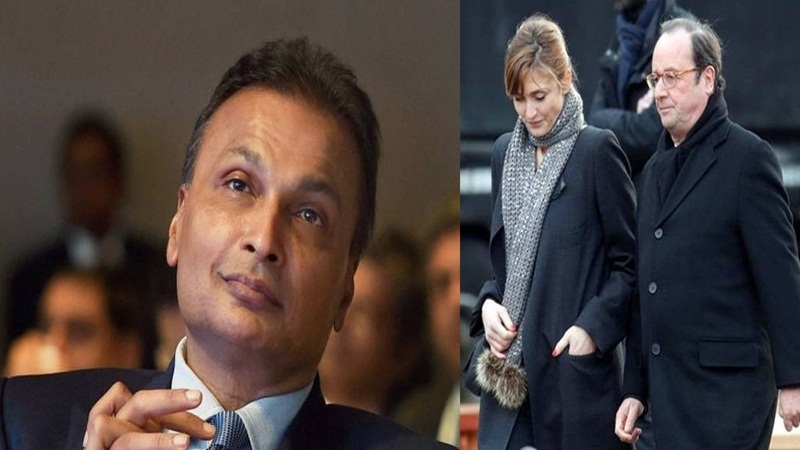 New Delhi: The Congress on Friday reiterated its demand for a joint parliamentary probe into the Rafale scam citing a multi-crore saga of conflict of interest and quid pro quo. This, it said, has become obvious after media revelations of a deal between industrialist Anil Ambani and the lady partner of former French President Francois Hollande.

According to media reports, two days before the French President Francois Hollande came to New Delhi as the Republic Day chief guest and signed a Memorandum of Understanding with Prime Minister Narendra Modi for delivering 36 Rafale aircraft, Ambani’s Reliance Entertainment entered into a deal to produce a film with Hollande’s partner and actor Julie Gayet.

Also Read: Rafale! What’s the big deal about it?

By an uncanny coincidence, the deal for the jets was also announced, negotiated between the two governments and signed during the presidency of Hollande, when Gayet was staying with him in Elysee palace in Paris. Hollande was President of France from May 2012 to May 2017 and his relationship with Gayet became public in January 2014. The first announcement of Dassault and Reliance creating a defence joint venture in India for execution of offset obligations was made in October 2016, again during Hollande’s Presidency.

The 98-minute French film, first screened at the San Sebastian International Film Festival in Spain in 2017, was distributed in eight countries, barring India. “The nation now knows why Prime Minister Narendra Modi didn’t need a prior Cabinet Committee of Security meeting to ratify his unilateral deal to buy 36 Rafale aircraft. This is because the film agreement was being signed behind the sets of the ”Magnum Opus” called Rafale scam,” Singhvi charged.

The jointly produced French film was called ”Tout La-Haut” (‘All the Top’). It was “a cherry on the cake,’’ a sweetener, for the murky deal involving the Rafale aircraft, Singhvi has alleged. He said the French media is already agog with stories about Gayet’s influence over the French President and a deal with her easily helped Ambani’s Reliance Defence to seal not one but two deals with Dassault Aviation — A Rs 30,000 crore offset contract and another Rs 1 lakh crore “life cycle contract.”

Singhvi noted that Defence Minister Nirmala Sitharaman’s big lie of no such scam was exposed by her French counterpart Florence Parly, who met her in the morning on October 27, 2017, and then proceeded to Nagpur to lay the foundation of the Reliance factory for executing the offsets in a function that was also attended by Union Minister Nitin Gadkari and Chief Minister Devendra Fadnavis.