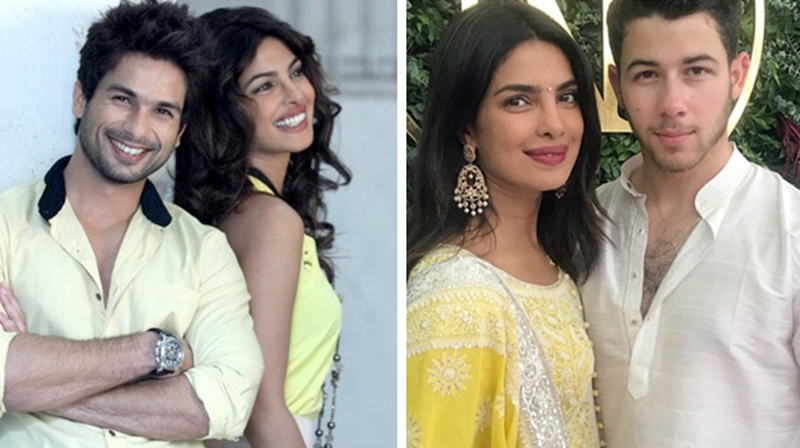 Priyanka Chopra is enjoying this blissful time in her life ever since her engagement to American singer-actor Nick Jonas. The actress had a traditional roka ceremony this past weekend and Nick was in India with his parents for the same. It was followed by an engagement bash which saw some of PeeCee’s close friends including Alia Bhatt and Arpita Khan Sharma and her sister Parineeti Chopra. While the world is congratulating Priyanka and Nick on their engagement, PeeCee’s former co-star Shahid Kapoor has also sent his wishes to her.

Shahid Kapoor, who is currently promoting ‘Batti Gul Meter Chalu’, was asked the engagement recently. Answering to the media questions, he said, “Many, many congratulations to Priyanka and Nick. Marriage is a beautiful thing, I can say that from my experience and I wish her all the best.”

Shahid Kapoor and Priyanka Chopra starred in a couple of movies together including ‘Kaminey’ and ‘Teri Meri Kahaani’. They were even rumoured to be in a relationship for sometime before calling it quits. Though they never admitted being in a relationship, Karan Johar kept dropping hints about them being together when they came on ‘Koffee With Karan’ together. In the next season, when Karan had asked how his relationship with Priyanka was after the breakup, he admitted that they were cordial if at all they crossed paths at an event or party.

The social media was filled with wishes for Priyanka Chopra and Nick Jonas on their engagement. Nick’s brothers Joe Jonas and Kevin Jonas and to be sister in laws Danielle Jonas and Sophie Turner welcomed Priyanka Chopra to their family. B-town celebrities including Ranveer Singh, Alia Bhatt, Arjun Kapoor, Sonam Kapoor, Varun Dhawan, Anushka Sharma, Shraddha Kapoor among others expressed their happiness of PeeCee’s engagement.