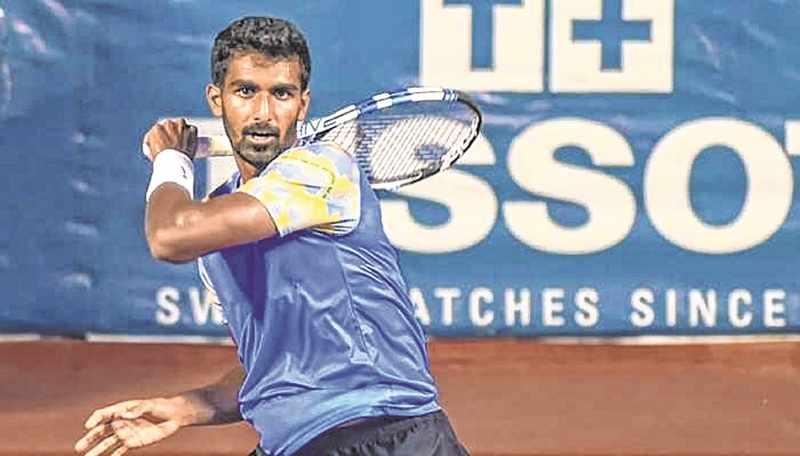 Pune: Prajnesh Gunneswaran demolished his opponent with ease while young Sasi Kumar Mukund yet again impressed with his perseverance as the two Indians moved to the quarterfinals with contrasting victories at the KPIT-MSLTA Challenger on Wednesday.

In the second round contest between the two left-handers, Prajnesh overwhelmed Germany’s Lucas Gerch 6-1 6-3 in just 53 minutes at the Centre Court.Grech, who had qualified into the main draw, proved no match to Prajnesh’s superior game due to his error-littered display. While he had the strokes, Gerch mostly hit the balls outside the lines, making it easy for the home favourite.

Prajnesh never took his foot off the pedal, pounding winner after winner to subdue the German. He will now fight it out with seasoned Alexander Nedovysov, who dumped qualifier Ben Patael 7-5 6-4.Wild card entrant Mukund did extremely well against sixth seed Briton Jay Clarke, who had won his maiden Challenger title at Binghamton (US) in July this year.

It was a baseline slugfest in which Mukund eventually prevailed as the Briton opted out of contest in the third set due to a back problem. Mukund was leading 5-7 6-4 4-1 at that time.Clarke, ranked 181 against a humble 355 of the Indian, felt the heat with Mukund matching his strokes and power from behind the  baseline.

The 21-year-old Indian was a break up and serving for the first set at one stage before allowing Clarke to take lead. Asked about his comeback, Mukund said, “It shows where I am. I need to improve mentally to close out games.” “It was very good for my level, my standards. There are 2000 players better than me. It was a really good match from both of us, some good rallies and good points.”