‘Poorna’ Review: Thank you for giving us a purpose 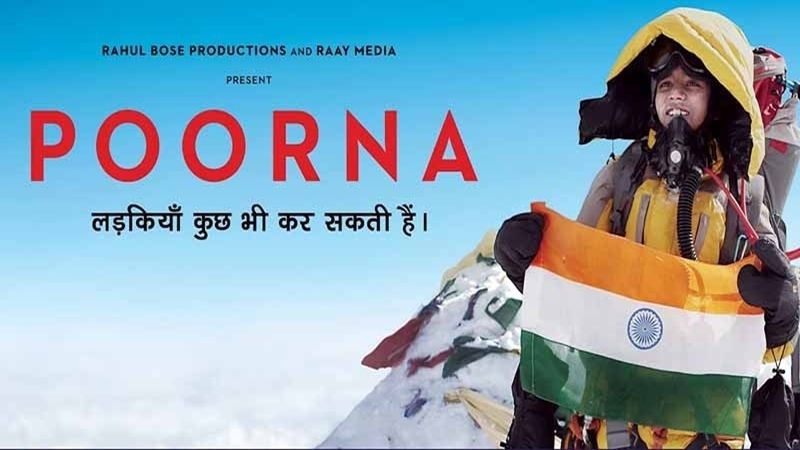 At one crucial point in the telling of this simple and heart-warming tale of a tribal girl’s climb from the pits of poverty to Himalayan heights, Rahul Bose, playing an upright bureaucrat, asks the little Andhra girl what is her purpose for climbing Everest.

“I have no purpose. I just want to do it,” she tells her mentor honestly.

The simple confessional articulation exemplifies this film’s mood. So rich in its message, so far-flung in its intentions and purpose and yet so intimate in treatment and execution, Rahul Bose wins you over with his honesty of purpose.

There are no duplicitous bones in the structure of this film.

Sure, there are passages in this motivational tale that follow the rags-to-riches trajectory with textbookish precision. But the heart is unweariedly in the right place, bringing to the narrative a kind of non-negotiable integrity that is at once compelling and winsome.

Authenticity is the key to the cogency of Bose’s vision. He chooses actors and locations as true to the original milieu as cinematically possible. The rest just follows. The narrative sweeps us into an emotional realism that is at once sparse and dramatic, pumping up the saga of resilience and humanism with vignettes and frames that form a panoramic arc over the film’s rugged landscape.

Poorna’s saga begins in an impoverished village of Andhra Pradesh and ends on the world’s highest summit — Everest. It is an ambitious arc, navigated and tempered with a lavish affection for the downtrodden and an absence of patronising pride in depicting the rise of a young underprivileged girl to heights of glory.

Little Ishaan in “Taare Zameen Par” had his Ram Shankar Nikumbh to steer him into the light. Poorna has Praveen Kumar, a bureaucrat who belongs to that rare breed of civil servants who still believes he took on the job with the purpose of improving lives of the underprivileged. I’ve read some very strange comments on how Rahul Bose has cast himself in a self-glorifying role.

Wait… Is that against the law? To play noble characters? Has that been declared a cognisable offence by a social order that thinks cynicism is cool?

It is easy to get cynical about a character whose heart bleeds for those who are not given one square meal a day. There is an emotionally surcharged moment in the narrative where the conscientious bureaucrat eats a mid-day meal with school girls to get a feel of the awful food that is served up by government-funded canteens. Rahul’s Praveen Kumar doesn’t flinch as he swallows morsels of the garbage (junk food at its purest?).

Throughout the telling of this inspiring tale of a girl who won’t buckle under the pressure of poverty and cynicism, Rahul gives us the portrait of a bleak landscape lit up by a distant hope. He is the artiste who won’t judge a value system that condemns the downtrodden to doom. But he won’t condone it either.

He can laugh with Poorna at her poverty — don’t miss the sequence where the girls at the boarding school giggle and compare each other’s poverty — but he won’t laugh at her condition.

“Poorna” is a little gem with a big heart. It has many virtues. Aditi Inaamdar who plays Poorna is a prized find. So is young S. Mariya as Poorna’s spunky but tragically vanquished cousin. The scenes showing the two girls bonding are so heart warming as to make us overlook the film’s obvious flaws of over-statement.

However, some of the other actors in incidental roles seem to have come on board just to feel good about themselves for helping a noble cause.

Take a bow, Rahul Bose. “Poorna” is not just a tale of the triumph of the human spirit. We all have a Poorna inside us waiting to conquer our own Everest.