Poll crackdown intensifies: Crime Branch swings into action to get ARMS and the MEN 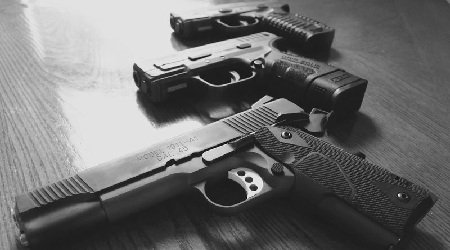 Indore is soon becoming infamous like the Wild West. Thanks to the polls, which are drawing closer. The city Crime Branch on Thursday arrested 12 persons with 19 firearms. Seven live cartridges were also recovered from them.

According to Additional Superintendent of Police (crime) Amarendra Singh, acting on a tip-off that some persons were involved in making and supplying firearms in the city for quite some time, a team was constituted to trace the suppliers. The team further received information that two persons from Dhar and Barwani districts were roaming in Raoji Bazaar area to supply firearms.

The team swung into action and cordoned off the area and managed to arrest Virendra Singh of Barwani from near Sunar Ka Bagicha area. Two firearms were also recovered from him and he was later booked under the Arms Act by Raoji Bazaar police station staff.

After that his accomplice Amarjeet Singh was arrested from Luniapura area with a revolver and a country-made pistol with a live cartridge. The accused allegedly informed the police that they had supplied firearms to many persons who keep firearms in order to threatening people and display their influence among people.

Following the lead given by the accused, the CB later arrested accused Shyam Khande from Narsingh Tekri area of the city. Two country-made pistols and a live cartridge were recovered from him.
Later, the CB team arrested one Than Singh alias Thanu of Alirajpur from Juni Indore area with two firearms and a live cartridge.

Crime branch along with Bhanwarkuan police station staff arrested four persons named Dhirendra alias Khatam of Rahul Gandhi Nagar with a country-made pistol, Manpreet alias Ravin Singh of Pipliyarao with a revolver, Vikas Yadav of Abhinav Nagar with a pistol and liver cartridge and Suresh Banjara of Rahul Gandhi Nagar with a pistol and live cartridge. The accused were booked by Bhanwarkuan police station staff under Arms act. Three persons were arrested by crime branch and Tejaji Nagar police with firearms. Accused Navin Katariya of Vidya Nagar area was arrested with three pistols and a live cartridge.

Accused Amarjeet informed the police that he used to make firearms at home for a few years and supplied the consignment to people in Indore, Dhar, Dhamond, Dharampuri, Barwani, Sendhwa, Julvania and Jhabua. The accused allegedly confessed to supply the firearms in other states also.