Philippines rejects China talks not based on sea feud ruling 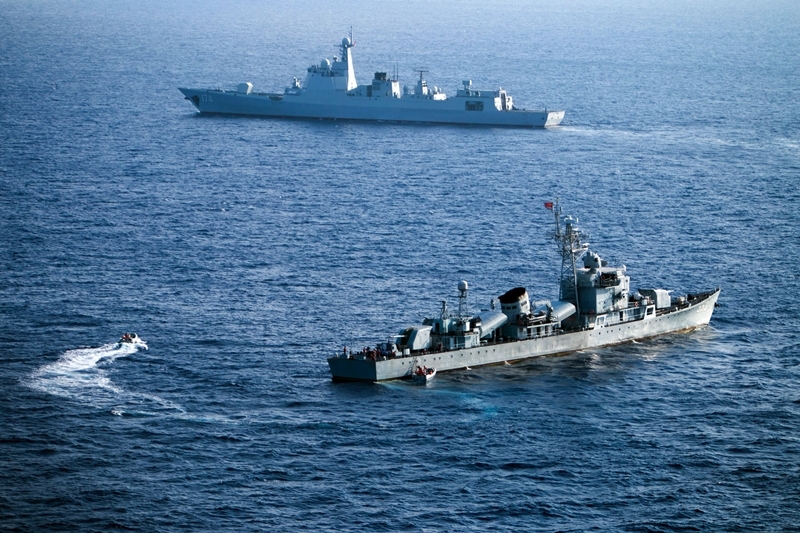 (FILES) This file photo taken on May 5, 2016 shows crew members of China's South Sea Fleet taking part in a drill in the Xisha Islands, or the Paracel Islands in the South China Sea. Beijing braced on July 12, 2016 for an international tribunal's ruling on the South China Sea, where it has expansive territorial claims, with all eyes watching for the Asian giant's reaction on the ground or in the water. Beijing claims sovereignty over almost the whole of the South China Sea, on the basis of a segmented line that first appeared on Chinese maps in the 1940s, pitting it against several neighbours. / AFP PHOTO / STR / China OUT |

Manila: The Philippines’ top diplomat said today he had rejected a Chinese offer to hold talks “outside of and in disregard” of an international tribunal’s ruling last week that debunked Beijing’s claim to ownership of virtually the entire South China Sea.

Foreign Secretary Perfecto Yasay Jr said he told his Chinese counterpart, Wang Yi, that China’s condition “was not consistent with our constitution and our national interest,” adding Wang warned that if the Philippines insists on China’s compliance to the decision, “we might be headed for a confrontation.”

During talks on the sidelines of last weekend’s Asia-Europe meeting in Mongolia, Yasay said Wang insisted that the Philippines should not even “make any comments” on the landmark decision by the Permanent Court of Arbitration in The Hague.

Wang “asked us also to open ourselves for bilateral negotiations but outside of and in disregard of the arbitral ruling, so this is something that I told him was not consistent with our constitution and our national interest,” Yasay told the ABS-CBN network.

“They said that if you will insist on the ruling and discussing it along those lines, then we might be headed for a confrontation,” he said. Despite the seeming impasse, Yasay said he was still hopeful both countries can find a way to resolve the long-seething dispute, suggesting China’s publicly issued positions may still change.

Yasay said he asked that Filipinos be allowed to fish in the Scarborough Shoal, where Chinese coast guard ships have blocked and turned away fishing boats since effectively seizing the disputed fishing area after a tense standoff with Philippine government ships in 2012.

Wang responded by saying China was open to discussing that possibility with the Philippines “but not in the context of the arbitral tribunal ruling,” Yasay said.

The Philippines decided to take its dispute with China to international arbitration in 2013 after China took control of Scarborough Shoal and reneged on a US State Department-brokered deal for both countries to withdraw their ships from the area to ease a dangerous faceoff, according to former President Benigno Aquino III, who brought the case against Beijing.

With the Philippines’ anemic military dwarfed by China’s forces, Aquino bolstered relations with the United States and other allies to deter China’s increasingly assertive actions in the disputed waters and modernise its air force and naval fleets, further straining ties with Beijing.