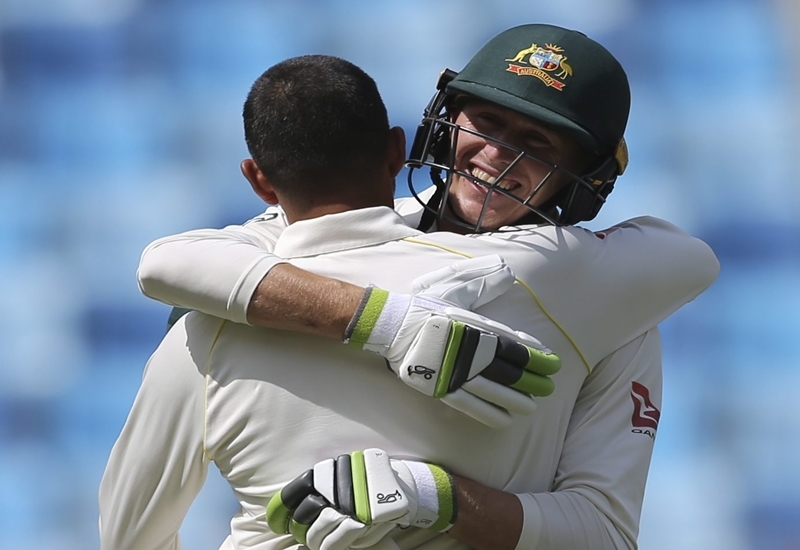 Sydney: Australia’s battling draw against Pakistan has ushered in a new era for a team desperate to redeem itself in the wake of the sandpaper cheating scandal, media said on Friday. In their first Test outing since the ball-tampering fiasco in South Africa, the Australians salvaged a draw in the opening Test in Dubai thanks to a dogged 141 from batsman Usman Khawaja.

While such a result would not normally be cause for celebration, ABC columnist Richard Hinds praised the way Australia refused to concede defeat when facing a seemingly impossible task. He said it was a promising start for the Test team under new coach Justin Langer, the former batsman who took over after predecessor Darren Lehmann quit in disgrace.

“No one knows more about the value of perseverance and preparation than Langer, given his wonderful career was a triumph of almost torturous dedication and bloody defiance,” Hinds wrote. “If this really was a Langer-era performance, let the dot balls flow.”  A common theme in reports was the contrast between the hardworking team Langer has forged with new captain Tim Paine and the posturing arrogance of the side involved in the ball-tampering affair earlier this year.

The scandal erupted when batsman Cameron Bancroft was caught trying to alter the ball using sandpaper in the third Test at Newlands in South Africa. Bancroft, former captain Steve Smith and his deputy David Warner were all sent home and handed lengthy bans, with Lehmann and Cricket Australia chief James Sutherland eventually resigning amid a huge public backlash.

ESPNCricinfo’s Australian writer Daniel Brettig said the result against Pakistan “picked up a previously forlorn team off the Newlands killing floor”. “For the first time in a while, Australia can wake up decidedly proud of their cricket team — of Usman Khawaja and Tim Paine in particular,” he tweeted.

The AAP domestic news agency said there were plenty of positives for Langer and Paine. “The depleted Australian squad was expected to struggle in the UAE but Paine could hardly have asked for a more spirited display to begin his new era in charge,” it said.

Writing in The Australian, sports reporter Ben Horne praised Khawaja, who made 141 off 302 balls on a deteriorating pitch to post the second-longest knock in a final innings in Test history. He said the defiant performance forever dispelled perceptions that Khawaja was a lazy player, saying he “suddenly morphed into an instant team leader”. “In the moment of reckoning in the first series since sandpaper-gate, Khawaja has shown he is now the best batsman in this revamped Australian side,” Horne wrote.