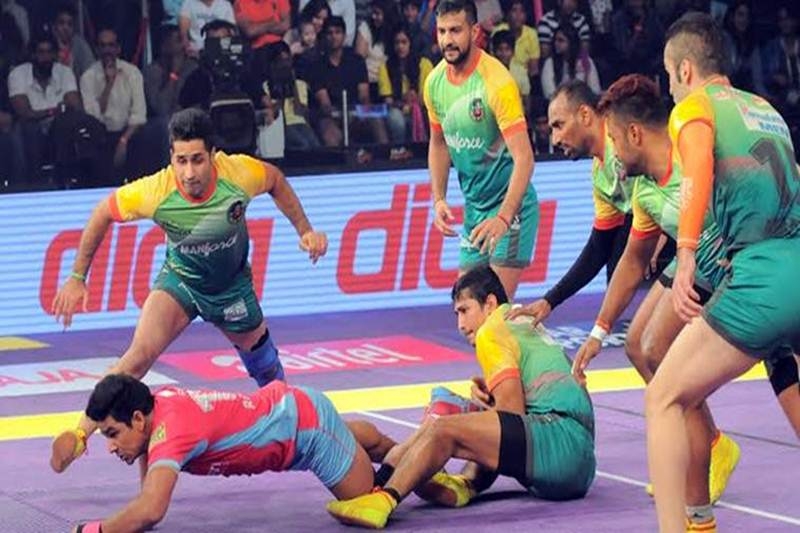 Hyderabad: The season fourth of the Pro Kabaddi League ended on a high note at the Gachibowli Indoor Stadium with reigning champions Patna Pirates recording a 37-29 victory over the formidable Jaipur Pink Panthers in the finale.

It was a closely contested 40 minutes of perhaps the finest kabaddi game of the season, as both teams battled for supremacy. Dharmaraj Cheralathan captain of the Patna Pirates, hoisted up the golden trophy amidst spectacular scenes of celebration.

It was Patna’s aggression versus Jaipur’s tactics and in the end, it was Patna Pirates who stamped their authority and emerged as champions of the League, claiming their second trophy.

Patna Pirates’ Pardeep Narwal scored 17 points and was awarded Best Raider while the champions’ Hodi Oshtorak was awarded the Best Defender of the Match respectively. Telugu Titans’ Rahul Chaudhari finished a dream season as the most successful raider with 146 points.

Earlier in the evening, Puneri Paltan beat Telugu Titans in the battle for the third place, with raider Deepak Niwas Hooda scoring 17 points for Puneri Paltan.

Both teams began strongly but it was Jaipur who struck the first blow as they packed off Pardeep to the bench in the fourth minute with the score at 2-2. Jaipur Pink Panthers then got three points with a super raid by Rajesh Narwal to lead 6-2 after five minutes. An all out looked imminent but Patna Pirates forced a super tackle in the seventh minute as they trailed 5-6.

Pardeep got into his act as he scored with a raid and bonus to give Patna Pirates 7-6 lead. He got another raid point as Patna Pirates led 9-6 after 10 minutes.

Jaipur Pink Panthers were unable to control Pardeep as he scored with a two-point raid to as they trailed 9-11 after 13 minutes.

Patna Pirates inflicted an all out in the 15th minute to lead 16-11. Jasvir Singh got four points in the space of two minutes as Jaipur leveled the game at 16-16 in the 19th minute. Patna Pirates forced a super tackle in the dying seconds of the first half to take a 19-16 lead at the break.

Rajesh Mondal failed to get a point on a do-or- die raid in the 23rd minute as Jaipir Pink Panthers trailed 18-19. Patna Pirates forced a super tackle in the 25th minute to lead 21-18. Pardeep continued his good form and scored two points as Patna Pirates opened a five-point gap in the 26th minute. He attained a super 10 as Patna Pirates led 25-19 after 29 minutes.

With less than five minutes left, Patna Pirates increased the lead to 10 points and led 33-23. Jasvir Singh scored his 10th point of the match in 37th minute as Jaipur Pink Panthers trailed 24-33. Patna Pirates’ strategy in the last few minutes were to play on empty raids and it worked well as their defence didn’t make any silly mistakes.

Jaipur Pink Panthers cut the lead to seven points in the 38th minute but Pardeep scored with a two-point raid to seal a historic triumph for Patna Pirates as they won 37-29.