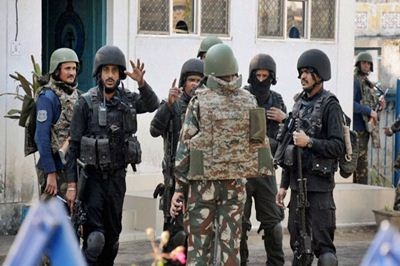 New Delhi :  The reported statement of NIA Chief — that thus far there is no evidence of Pakistan government or its agency abetting the JEM terrorists in carrying out the Pathankot attack — has triggered a fresh round of sparring between India and Pakistan with New Delhi saying that involvement of its nationals “is an accepted fact”.

Even as the NIA backtracked on its chief Sharad Kumar’s statement, on its part, Islamabad highlighted his remarks to claim “vindication” of its long standing position in this regard. The row erupted after a written interview that Kumar purportedly gave to a television channel in which he had said “No. So far, there is no evidence to show that the Pakistan government or a Pakistani government agency had helped Jaish-e- Mohammed or Masood Azhar to carry out the Pathankot attack.”

Later the NIA issued a statement saying the observation attributed to DG NIA as regards Pathankot investigations “are strongly refuted.” It said his statement has been misquoted. The External Affairs Minister reacted to the controversy saying the DG NIA has already issued a clarification and it put out the government’s position that “the involvement of Pakistan’s nationals in the Pathankot Air Base attack is an accepted fact.

At the Congress briefing, party’s chief spokesperson Randeep Surjewala, however, launched a scathing attack on the government accusing it of weakening India’s fight against terrorism nationally and internationally with the NIA director giving “clean chit” to Pakistan and its agencies.

He said that this was lamentable given the fact that India had succeeded in putting Pakistan in the dock after the 26-11 Mumbai terror attacks. PTI